The Seasons turn once again, and Sea of Thieves' world expands beneath the waves! First sighted in the Tall Tales of Season Three, the full expanse of the Sunken Kingdom becomes explorable in Season Four. Scout out the Shrines, tear through the Treasuries and reap the rewards! But first, watch the trailer...

Now get your teeth into the details below as you prepare for undersea adventures, imminent Events, Emporium enticements and a deluge of Deeds. Read on!

Do you dare seek the spoils of the deadly Sirens? Their Shrines and Treasuries are now laid bare to any sailor of the Sea of Thieves. Great wealth and knowledge await those brave enough to take the plunge, but the Sirens and Ocean Crawlers will protect it with their lives...

Coral Message in a Bottle Quests

Mysteries of the Sunken Kingdom

Another 100 levels of Seasonal progression with a wide range of rewards to shoot for, complemented by a shake-up of the Trials and Deeds system that now gives you more varied ways to get there. New Emissary Ledger rewards? Season Four has those too! 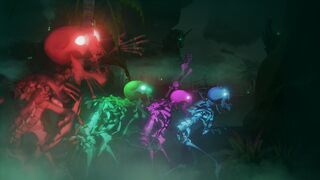 For those seeking something a little more focused than the intentionally wide-ranging Trials, each new Season delivers new time-limited in-game Events offering their own rewards. Find out what you can expect in the opening weeks of Season Four!

Fury of the Damned (Coming Soon) 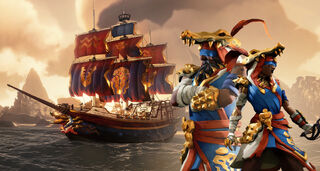 Whether you go down a regally reptilian route with the Golden Nile collection or raise your emote game with Absolute Joker and Victorious Weapon Pose picks, September's Emporium restock has you covered. Meanwhile, everything's new in the Season Four Plunder Pass!

Bite and Brighten Bundle (Store Only)

Muting Copyrighted Audio in Sea of Thieves: A Pirate’s Life

Legend of the Sunken Kingdom Voyage