With Season Six underway, the team have been working on new Adventures, new Voyages and additional fixes based on feedback from the community. We’re introducing more of these features in today’s release, update 2.5.1.1.

For a refresher on all the new content that arrived at the start of Season Six, check out the launch release notes!

It’s time for Sea of Thieves’ third time-limited Adventure, driving the grand story of its people and pirates ever onward into a confrontation with a beast from the deepest legends! Play your part from April 21st...

Legend of the Veil[] 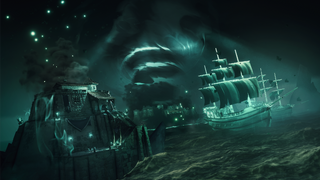 Following the events of ‘The Shrouded Deep’, this new multi-stage Voyage summons the Sea of Thieves’ hard-bitten Pirate Legends to help Belle and the Pirate Lord restore the lost Veil Stones to the Veil of the Ancients!

Legend of the Veil Voyage

Legend of the Veil Commendations and Rewards