As our third time-limited Adventure ‘The Shrouded Deep’ reaches its conclusion, Season Six Community Day springs up to keep pirates busy in the interim while the Pirate Emporium is treated to a colourfully regal restock. And if you still haven't fully explored those Sea Forts, whet your appetite with the original Season Six trailer...

Our time with Season Six is growing short, so as we head into its final month, keep reading for all the info on what's new and incoming between now and the next Adventure! 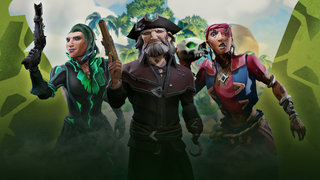 Another Community Day arrives this month, with freebies, sales, multipliers and more for players setting sail and sharing their stories, ideas and endeavours! Meanwhile, Season Six isn’t quite done with Twitch Drops yet...

May brings opportunities to mimic the most majestic of fish via the extensive Lionfish collection. Meanwhile, the Pocket Crab and Pocket Rat emotes broaden your animal friendship options, and it’s your last chance to pick up this Season’s Plunder Pass!

Legend of the Veil Voyage