The Ashen Winds Skull is a special type of Bounty Skull in Sea of Thieves. Ashen Winds Skulls are the remains of a defeated Ashen Lord. The power of the defeated Ashen Lords still course through the Skull, allowing Player Pirates to harness its power and blow Fire out of the Skull when holding it. However, the Skulls have a limited charge and will lose their power after the flame crystals are used up. These Skulls are very valuable to the Order of Souls Madames stationed at Outposts, who are willing to buy them from Crews in exchange for Gold and Reputation (and Emissary Value when sailing as Order of Souls Emissaries). The worth of the skull is dependent on its flame charge - an unused skull will be more valuable than an used one, with a completely depleted Ashen Winds Skull rewarding considerably less Gold, Rep and Emissary Value.

While Ashen Winds Skulls mostly act identical to all Treasure Items, they are unique in that they can also be used as a Weapon. Every Ashen Skull has a "Flame Charge", which is signified by the crystals on the skull itself. When held in hand, Players can make the Skull spew Fire by holding down Primary Interact (

by default). The Flamethrower attack will set Fire to anything that gets in its path, including Ship surfaces and Players. The attack itself doesn't deal any major damage. As the Skull is used, the crystals will start to dim until the skull will run out of charge and lose its glow. At this point, it can no longer be used as a weapon. It takes roughly 45 seconds to deplete the Skull's charge.

Ashen Winds Skulls can currently be acquired from the Ashen Lords World Event, dropped by Lords upon defeat, or dug up during the last chapter of A Legendary Stash of Powder and Arms Voyage.

Ashen Winds Skulls can be sold to:

The value of an Ashen Winds Skull is dependent on its "Charge". The Skull is worth its max base value when unused and its minimum base value when completely depleted of its Fire Breath charge.

The following is the reward chart for the Skull: 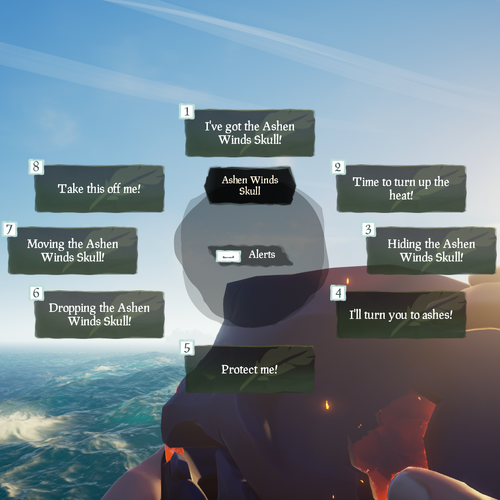