Athena's Fortune is one of the major Trading Companies in Sea of Thieves that only deals with Pirates of Legendary repute. Formed by the Pirate Lord, Athena's Fortune is only accessible to Player Pirates who have proven themselves as Pirate Legends. While most of the Company hides in the Athena's Fortune Hideout, accessible through Taverns with the use of a special Shanty, Player Crews can find the Mysterious Stranger as the company's Representative at any Tavern. Players can climb up to 30 Reputation Ranks with Athena's Fortune through performing various legendary deeds for them.

Athena's Fortune is a Trading Company accessible only to Pirate Legends. They reside in Athena's Fortune Hideout, where the ghostly Pirate Lord issues Legendary Athena's Fortune Voyages. The rest of his ghostly crew populates the Hideout Tavern, telling legendary tales and offering Legendary and Ghostly Cosmetics for Player Pirates who have proved their worth on the seas.

In order to access the Athena's Fortune Hideout on their own, players must achieve the title of a Pirate Legend. The Mysterious Stranger will assess a Pirate's reputation, and if deemed fit, will teach them the Shanty of Legends. This Shanty can be played with any instrument only in a specific space within any Outpost's Tavern which is near the long wall that is opposite to side with the fireplace. Playing the shanty here will open the secret tunnel passage containing the portal to Athena's Fortune Hideout. While players without the Pirate Legend title can travel through the portal to the Hideout, their access to voyages and other facilities is limited.

The following NPCs are related to Athena's Fortune:

The following services are offered by the Mysterious Stranger inside every Outpost Tavern:

The following services are offered to Pirate Legends at Athena's Fortune Hideout:

, these voyages are composed of quests from various Trading Companies, ultimately leading to a Chest of Legends. There are two types of Legendary Voyages: a regular Athena's Fortune Voyage and an Ashen Athena's Fortune Voyage. The regular voyage issue quests located in the three main Regions, while the Ashen versions has quests traveling throughout the entirety of The Devil's Roar for increased risk and reward. Both of these Voyages consist of two chapters. The first chapter will provide the Crew with 8 maps: 2 Treasure Maps with 4 Treasure Chests each, 2 Riddle Maps with 4 clues each, 2 Bounty Maps with 4 Skeleton Captains each, and 2 Cargo Runs with 4-6 items each. Upon the completion of all these tasks, the second and final chapter will provide the crew with a Treasure Map with one X, indicating the location of either a Chest of Legends or an Ashen Chest of Legends, depending on the Voyage. These Chests are one of the more valuable Treasure items in the game, they are to be sold to the Mysterious Stranger for Gold and Athena's Fortune Reputation. Additionally, players can find individual Athena's Treasure Items in the Voyages.

The Athena's Run of Thieves' Haven Mercenary Voyages is also available from the Bilge Rats to search for various types of Athena's Treasure.

The highest value voyage of Athena's Fortune is the Legend of the Veil voyage. The first two chapters of the voyage are interchangeable which could have pirate legends solve Lying maps, Zoomed in maps or Pictorial maps from Sudds, Dispelling Haunted Islands from Belle, and exploring Shipwreck Graveyards, The Final chapter is always the same having players destroy ghost forts and ships to receive their fortune. This Voyage will give pirate legends level 5 emissary by the end; if the players pick up all Athena Items, and place the Veil stones in the Veil of the Ancients

. Most of the promotions have no unlockable Cosmetics directly tied to them, except for the level 30 promotion which unlocked the Veil of the Ancients Costume. There are also pet cosmetics tied to reaching Rank 20, such as the Whippet Ghost Outfit. 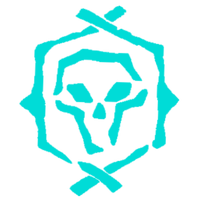 The following is a table of all the Athena's Fortune Promotions and the Titles that are unlocked after achieving them:

Any players wishing to represent Athena's Fortune on the open seas can do so by becoming an Athena's Fortune Emissary. Pirate Legends are able to purchase the emissary flag from the Pirate Lord for 20,000

. Player Crews can vote to raise a Company Emissary Flag at the Company's Emissary Table. Athena's Fortune Emissary Tables can be found by the Mysterious Stranger. Once voted upon, the Crew's Ship will receive two Company themed Flags on their Ships to designate their Emissary status: a big Flag on the back of the ship and a Pennant on top of the Crow's Nest. These Flags will signify the Emissary Ship's current Emissary Grade and will change as the Crew progresses through the Grades. Athena's Fortune Emissary Flags are Dark Blue and neon Green and will play a distinct tune when viewed from a Spyglass by other Crews. When an Emissary Ship sinks or is scuttled, the Emissary Flag will be lost along with any earned Grade progress. The Broken Emissary Flags that float up from the sunk ship can be sold to The Servant of the Flame at The Reaper's Hideout. When Crews vote to lower their own Emissary Flag, they earn large sums of Gold and Reputation with the Emissary Company (only after Grade 2).

Every Athena's Fortune Emissary will start out at Emissary Grade I and be able to progress up to Grade V. These Grades are displayed on the Ship's Emissary Flags. Players can also check their Emissary Grade progress by using the Equipment Radial Menu or opening up their Reputation tab at the Pirate Menu.

With each Emissary Grade, players will receive greater Rewards, Athena's Fortune Reputation and Emissary Value for any sold Athena's Treasure. Note that Players do not get Emissary Grade Reputation from selling Items to the company. The following is a chart of the reward and value multiplier of Emissary Grades:

Athena's Fortune Emissaries can gain Emissary Reputation and progress through Emissary Grades in the following ways:

Things that do not give Emissary Grade Reputation for Athena's Fortune:

The Athena's Fortune Emissary Quest gives all players of the Crew a Treasure Map, a Riddle Map and a Bounty Map that reward them with Athena's Treasure. Once completed, Crews will receive a single X Marks the Spot Map with 2 X's that uncover a Keg of Ancient Black Powder and a Chest of Legends.

Athena's Fortune Emissary Ranks and rewards are as follows:

Legend of the Veil Commendations:

The following is a chart of approximately how many Chests of Legends on average are needed to be sold to level up to Rank 10 in Athena's Fortune. Ashen Chest of Legends is worth 1,5x as much as Chest of Legends. With the introduction of Athena's Treasure and the Emissary system, the table is less useful, as players have much more varied methods of earning Athena's Fortune Reputation than they used to.