Broken Emissary Flags are Treasure items valuable to the Reaper's Bones in Sea of Thieves. They are acquired from sunken Player Ships that represented a Trading Company as Emissaries. Each of these Flags appear in 6 variations, which all look visually identical. The variations depend on the Emissary Grade and Ownership of the sunken Ship's Flag. The higher the Emissary Grade of the Ship, the more valuable the Flag is to the Reaper's Bones. The Flags can only be sold to The Servant of the Flame at The Reaper’s Hideout for Gold and Reaper's Bones Reputation and Emissary Value. Player Crews only receive 1 Gold and no Reputation if they sell their own ship's Broken Emissary Flag. The variant of the Broken Flag can be determined from its Pick-Up Prompt.

Broken Emissary Flags can be found floating to the surface after a ship representing either the Gold Hoarders, Merchant Alliance, Order of Souls, Reaper's Bones or Athena's Fortune as an Emissary has sunk. This is the only source for the Flags and as such, they require Resources or strategy to sink the ship and stop other players from taking the Flag. Player Crews can also Scuttle their own Emissary Ship to receive their Flag, but selling your own flag will only reward the Crew with 1 Gold and a note from the Servant's displeasure with you.

The following is a list of all the Broken Emissary Flags:

There are 6 variations of each Company's Broken Emissary Flags that can only be sold to The Servant of the Flame at The Reaper's Hideout for Gold and Reaper's Bones Reputation and Emissary Value. Remember you cannot put this flag back up!

Here is the Pirate Chat Wheel for the Broken Emissary Flags: 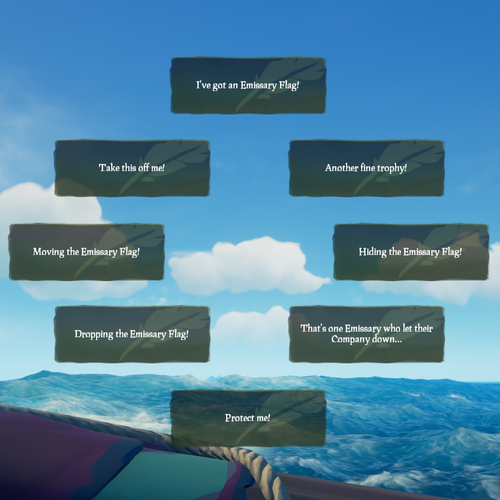