The Bucket is an Equipment item in Sea of Thieves used to collect and throw liquids. 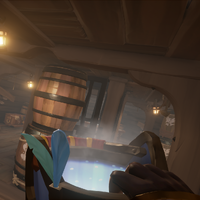 Boiling water in a bucket.

Every Player Pirate will receive a Bucket during their Maiden Voyage, which they can use at any time during their adventures on The Sea of Thieves. The Bucket can be accessed from the Equipment Radial Menu. Players can check out their own Bucket in 3rd person view with the Bucket Prank Emote, which is available for purchase from the Pirate Emporium for Ancient Coins.

The Bucket is most commonly used to Bail water out of a Ship that is letting through water. It may also become necessary when a Ship has taken on water for other reasons, like a severe storm or a crying Chest of Sorrow. Water collected from within a ship must be dumped overboard, as dumping it back on the ship's surface will result in the water collecting again on the lower decks.

The Bucket is also useful for putting out any Fires. Any water bailed at fire will extinguish it. Players can press the Secondary Use when there is water inside a Bucket to throw the water at themselves, dousing any fires. Players can also use the Bucket to douse the flames of Beacons and lit Campfires.

A Bucket of Water can be used to clean any dirty Pets.

The Bucket can also be used to catch and throw Vomit, primarily for comical effect. A player who is vomiting from drinking too much Grog or having eaten non-edible Food can hold the Bucket out to fill it with puke. The player can then throw this at other people, which causes the receiving player's view to be temporarily blocked by a green vomit puddle. Any thrown vomit will also make other Pirates vomit. Like with water, a bucket of vomit is also useful for putting out any fires; any vomit thrown at fire will extinguish it.

All new players are equipped with a basic Sailor Bucket by default. Other versions are available for purchase from the Equipment Shop or Companies.