The Chest of Ancient Tributes is a type of Treasure Chest in Sea of Thieves locked away in a Gold Hoarder Treasure Vault. The Chest can be sold to the Gold Hoarders (or Reaper's Bones) for Gold, Reputation and Emissary Value.

A Chest of Ancient Tributes can currently only be acquired from inside a Gold Hoarder Treasure Vault. These Vaults are hidden around Large Islands all over The Sea of Thieves. Any Players wishing to find these vaults and access them can go on a Wayfinder Voyage to locate a Treasure Vault Key by the use of a Torn Map pieced together by Parchments, which in turn have to be located with the use of a Golden Wayfinder Compass. The acquired Key will be named after a Large Island with an inscription hinting towards the location of the Ancient Vault on that Island.

When opened, Players have to locate three hidden Vault Medallions in the Vault (easily seen by their permanent white glint), place them in the Vault Table and help reveal the image solutions for the first three Pillars in the Vault. The fourth Pillar image has to be made up of the first three images. Once opened, the Vault will reveal the Chest. Players can also take mounds of Gold, Treasure Chests and Trinkets with them from the Vault, but they only have 3 minutes until the Vault itself closes.

Chests of Ancient Tributes can be sold to:

The following is the reward chart for sold Ancient Tribute Chests sold to the Gold Hoarders:

The following is the reward chart for sold Ancient Tribute Chests sold to The Reaper's Bones: 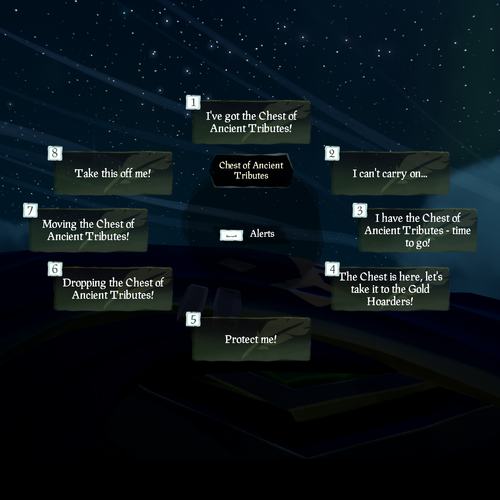