Cursed Sails is the second free DLC for Sea of Thieves. The DLC released on July 31st, 2018. The update features AI skeleton controlled ships, 3 player Brigantine ship, and an alliance system. New ship customizations and cosmetic items have been added to the stores. This includes the Hunter Set, and the Bone Crusher Set.

The event will lead players to discover what has happened to Wanda since her odd behavior was noticed in The Sunken Curse event. In that event Wanda was no longer able to speak and was highly interested in an injury to her arm that she kept checking, as seen through her shop window. Just before the launch of the DLC, Wanda's arm has turn skeletal and she continued to hide it when players approached her. The mysterious man who used to appear next to her is gone, but not completely. It turned into a skeletal parrot and perched itself on the roof of the shop. Behind Wanda on the shelf were three purple and green cannonballs that had an odd glow to them.

The cursed cannonballs turned out to be rewards for completing one of the campaign events. They apply effects to enemy players’ ships and crew when the ship was hit with the cannonball. For example, there is a cannonball that makes the players drunk, one that locks the wheel, one that causes the ship to ride low in the water (causing un-repaired holes on the mid deck to let water into the ship), and possibly one that makes the enemy players dance. Three known named cannonballs include the Snooze Ball, the Wrecking Ball, and the Venom Ball.

In an attempt to leave the outpost but not lose everything during the skeleton event, the shop vendors offer players their items as a discounted price. (It is assumed that this is temporary until the event is over.) The shops are boarded up but the vendors can be visited at the large banner nearby.

The events last for three weeks from the start of the DLC and will no longer be available to players, but the skeleton-crew ships will remain in the world much like the Kraken.

Also featured, and now a permanent part of the game is the new 3 player Brigantine ship that has 2 decks, 2 masts and 4 cannons (2 on each side). There is no captain's quarters on the new ship but voyages can be voted on downstairs.

Finally there is the new alliance system, that allows players to form an alliance with other crews (but will still be able to harm them). This is done by two ships raising the new alliance offer flag while in range. Thme pennant-shaped flag is located in the Flag Box in the Crow's Nest. Crews that share an alliance can then dig up treasure together, propose voyages, and share the rewards.

Each outpost will have a large banner place in the center where the vendors are located. Each outpost will have one and each one is tied to one of six ships the player will need to locate. If the flag is red, blue, green, purple, maroon (or any other color other than white), there is a note attached to the banner that the player needs to read. This note will explain the location of the skeleton ship. Once the note has been read, the player will have a limited time to find the first ship. With notes on six outposts, this leads to six rounds of ships to defeat. The first two rounds include only one ship each, the third, forth, and fifth location will spawn two ships each, and the last spawn will have three. If the flag is white it is already in progress.

The goal after the skeleton ships spawn, is for the player to sink it. This will be harder for solo players but those will multiple crew members will want to leave someone on the player ship to fire the cannons while another player is on the enemy ship, preventing repairs. During the fight, the captain will spawn and attempt to maneuver the ship. Kill the captain to keep the ship sailing in a straight line.

Defeating the ships will award the player with a cursed cannonball that they can fire at enemy players to curse their ship and any crew on it. Different cannonballs have different effects. The ships also contain skeleton chests and skulls that can be turned in for gold at any outpost.

More events may be added during the DLC campaign.

When players first log in during the DLC, can talk to Duke, the Bilge Rats rep who hangs out in the Outpost Tavern. He will provide the player with basic information. According to Duke, a skeleton captain calling herself 'Warsmith' have united crews of skeletons against the outposts. They have been planting banners at each post, which has the vendors running scared. Well, more like 'cowering scared' as the shops have been closed and the vendors are now cowering near the banner. The batter itself is topped with the top half of a skeleton that will 'come alive' when approached by players. The notes on the banner are related to the above mentioned event.

After talking to Duke, players should head to the Golden Sands Outpost to start the search for Wanda. Go to the west end of the outpost and locate the Shipwright Shop and talk to Sharon. She will be very upset and worried about Wanda and will ask the player to check Wanda's shop for clues.

In the shop, players will meet Wonda, Wanda's sister, who has no idea where Wanda is. The shop is a mess but there are clues on the counter including a note that mentions a scheme and someone named Salty. On the left side of the shop there is a pendant on a wooden box. The pendant is meant to be used as a talisman to protect the wearer from curses, but has been discarded.

Outside the shop are bony footprints. Follow them to the northwest and inspect the spot where they end. Here players will be rewarded the Seeker of Wanda's Treachery achievement for finding all three clues. Return to Sharon at the Shipwright Shop to learn more. She will mention that Wanda used to hang out at Crescent Isle with Salty. Time to head to the isle.

On the southern part of the isle is a bay where players will find Salty, regardless of what he was before, he is now a squawking undead parrot. Talk to him and he will start to remember fragments of what happened while journeying with Wanda. He will mention three locations. The first is Mermaid's Hideaway, south of Crescent Isle. Be wary when approaching the isle as players may be attacked from the shore by cannonballs. On the north end is a pond and at the south end of the pond is a campfire. Near the fire on a plank bench is Wanda's journal. Interact with it.

The next place to go is Thieves' Haven near Plunder Outpost. The island is made up of three sections of land connected by bridges. Head into the inner bay and navigate east to a short sandy beach. Wanda's journal is located near a makeshift shelter and a painting of giant crabs.

The final location is the isle mentioned as sitting between two outposts. This is The Sunken Grove which is located between Dagger Tooth Outpost and Galleon's Grave Outpost in the northwest section of the map. Look for a small pool with a waterfall inside the island. There will be a cave above that players will need to access. Look near a bench for the third journal. Players who have all three will get the Seeker of Accursed Plans Commendation. Return to Salty on Crescent Isle.

When players talk to Salty, he will remember that he and Wanda had used a lab on the Wanderers Refuge to make the accursed equipment. Sail to the island to the southeast. Look for the tunnel at the center of the island. It will have a small stream going through it. Head northwest from inside the tunnel and watch for a campfire. On the opposite side of the stream is a tiny opening in the rock wall. The passage will lead to Wanda's secret lab. The lab has several alchemy and smithing items in it.

There are five items that players will need to locate and interact with:

After finding all five items, players will receive the Seeker of the Warsmith Commendation as well as the vanity title Seeker of the Warsmith. Return to Sharon at the Golden Sands Outpost and tell her what you have discovered. After talking to her, Sharon will give the player the Shores of Plenty Sail for free. She will also suggest the player talks to Sue at Plunder Outpost for the Ancient Isle Sail, and Sandra at the Dagger Tooth Outpost to also get The Wilds Sail for free as well.

Add a photo to this gallery 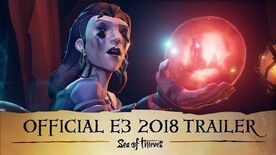 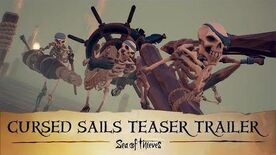 Official Sea of Thieves- Cursed Sails Teaser Trailer
Add a photo to this gallery
Retrieved from "https://seaofthieves.fandom.com/wiki/Cursed_Sails?oldid=6569"
Community content is available under CC-BY-SA unless otherwise noted.