Dogs are a type of available companion Pets in Sea of Thieves. They can be purchased from the Pirate Emporium for Ancient Coins. Dogs are loyal to their owner, following them on and off the Ship.

Dogs are mostly mechanically identical to other Pet Species, especially Cats due to their large size. Dog hangout spots are rather on the deck of the Ship, instead of the railings. Dogs have unique sound effects, animations and interactions with Pirate Emotes.

There are three breeds of Dogs in the game: the shepherd Alsatians, the fluffy Inus and the skinny Whippets. 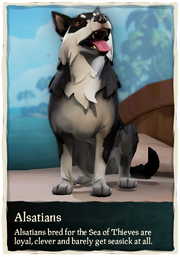 Alsatians bred for the Sea of Thieves are loyal, clever and barely get seasick at all. 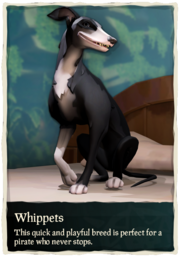 This quick and playful breed is perfect for a pirate who never stops. 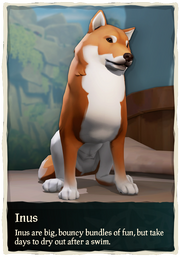 Inus are big, bouncy bundles of fun, but take days to dry out after a swim.

The following are all the available Pet Outfits for Dogs