Emissary Quests are special collections of high-value Quests offered by Trading Companies to any Emissary Grade V Crews in Sea of Thieves. 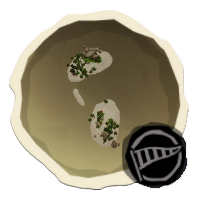 In order for a Crew to be eligible to claim an Emissary Quest from a Trading Company, they first need to progress their way through Emissary Grade ranks up to Grade V. Player Crews can become Trading Company Emissaries by acquiring an Emissary Flag (One time 20000 Gold purchase from Company Representatives) and voting to raise it at a Company's Emissary Table. Once the crew is Representing a Company as an Emissary, they start out at Grade I, after which they need to perform various tasks beneficial to the Company until they reach a Grade V Emissary Status. After Grade V is reached, the Crew is notified of a Quest or bonus becoming available. Crews have to travel back to any Outpost to Claim an Emissary Quest from the Trading Company's Representative.

Once Claimed, the Crew will receive Company related Quests that offer only the highest value rewards related to that Company. Player Crews can only claim one Emissary Quest in return for reaching Grade V. If they wish to Claim more, they will need to return their Flag by lowering it at a table or having their ship Sunk, represent the Company again and progress to Grade V to claim another one.

Emissary Quests have a Gray Icon resembling an Emissary Flag.

Emissary Quests are not counted as Voyages and as such, can be done aside a Voyage.

The Reaper's Bones Company has no Emissary Quest. Instead, they will gain the power to see the shadows of all other Emissary Ships on the Map Table as if they had the Flag Of The Reaper’s Mark raised.

The following is a list of all the Quests and Bonuses that Emissaries receive when reaching Grade V: