The Festival of the Damned is a Bilge Rats DLC adventure in Sea of Thieves. It was teased at New York Comic Con 2018. The event is centered around the ghost pirate Ferry of the Damned and it's Captain, It will also include additional cosmetics such as Face Paint. It released on October 31, 2018. Since the event is based around Halloween, a variety of pumpkins and gourds were placed around the outposts, and the music had a bit more 'spooky' tone to it.

During the event, player who die in specific gruesome ways (as listed below) will be sent to the Ferry of the Damned as per normal, but while there will have an opportunity to raise their lantern to the Flame of Fate and take a take a specific light color from it. The available color is based on the way the pirate died. Be sure to talk to the Ferryman before leaving the ferry.

Players can use the colors to light the lanterns on their ship in the various colors, and there is an achievement for having them all. There are a total of twelve beacons to locate on the map, some easy to spot while others are more hidden. Use the lanterns with the colored fire to light the beacons.

Included in the update are more violent storms, so be sure to watch out for those while looking for beacons, unless of course, you are hoping to get hit by lightning!

Ways to die per color 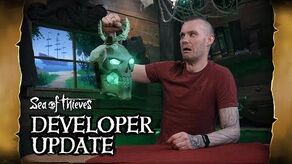 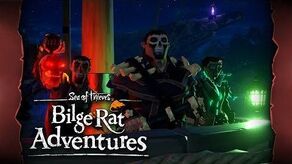 Official Sea of Thieves Bilge Rat Adventures Festival of the Damned
Add a photo to this gallery
Retrieved from "https://seaofthieves.fandom.com/wiki/Festival_of_the_Damned?oldid=6929"
Community content is available under CC-BY-SA unless otherwise noted.