Fire is an environmental Hazard in Sea of Thieves. 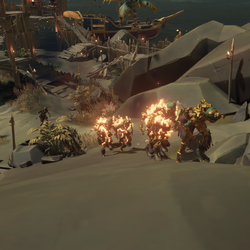 Fire spreads from skeleton to skeleton. 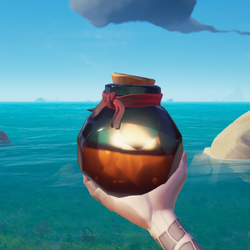 Firebombs are the main source of fire. 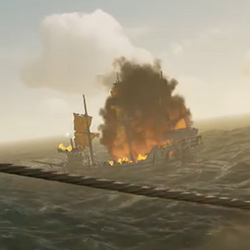 A Skeleton Ship set on fire by Firebombs

Fire is a lingering Hazard that continuously damages anything around it and can spread from source to source. Any Players or Skeletons that come to contact with fire will start burning and taking damage over time. Contact with fire does about 33% damage to the Players until it disappears. Fire can spread between any burning Players and Skeletons upon contact.

Fire cannot spread on Land, it can spread on the wood of Ships. Fire will slowly start causing damage to any Masts, Wheels, Capstans and walls of a Hull that it spreads to. It generally takes around 1-2 minutes of burning to cause a single injury to the ship.

It is worth noting that fire cannot create holes in the hull if it is present only in the top deck. Fire cannot spread around in the lower decks if there is a layer of water collected on the floor. In the specific case of the Sloop, pirates must manually keep fire out from the cabin under the poop deck (where the map is located), since a water layer cannot be made in this area to deter fire damage.

Fire on ships and players can be doused when upon contact with any source of Water, be it Water gathered in Buckets, or water from Rain. Players on fire can simply walk into a body of water or use the Bucket to throw gathered water on themselves with the Secondary Use Button(

). On a Ship, Players have easy access to water from the Water Barrel. A bucket's worth of water is enough to extinguish up to three tiles of fire on a ship.

Dying to fire gives the player a red Flame of Fate at the Ferry of the Damned.