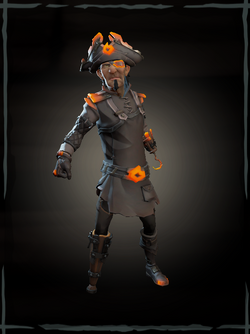 The Full Set with the Forsaken Ashes Jacket. 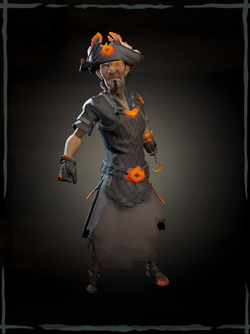 The Full Set with the Forsaken Ashes Dress.

The Forsaken Ashes Set is a Cosmetic Set themed after the Ship and Crew of the Shroudbreaker captained by Grace Morrow. The majority of the Set was made available to purchase during the Forsaken Shores Content Update. The set is themed around the volcanic visuals of The Devil's Roar Region, which was added during the Update.

While most of the Set can be unlocked for purchase from Outpost Shops after finishing the Master Devil's Voyager Commendation, the initial Ship and Weapon Cosmetics were only available from the Bilge Rats for the duration of the Content Update and are no longer obtainable. Until the Anniversary Update, Forsaken Ashes Set Cosmetics could only be bought from Morrow's Peak Outpost Shops in the Roar.

The missing Capstan, Cannon and Wheel Cosmetics are available for purchase for Doubloons in the Black Market.

The Forsaken Ashes Cutlass returned as a reward for completing various tasks in the Roar during the Forsaken Shores Anniversary Event that ran between April 3rd - April 9th, 2020.