The Fruit Crate (also referred to as Crate of Fruit) is a type of Resource Crate for Fruit in Sea of Thieves. Resource Crates can be filled with various Resource Commodities and traded to Merchant Alliance Representatives on Outposts who offer Gold and Reputation for them. Resource Crate deliveries can also be Commissioned via Trade Good Commissions acquired while sailing around the seas. Commissioned Crates reward Crews with nearly double the regular filled Crate's value when delivered to the correct NPC in Time.

Every Fruit Crate can carry up to 50 pieces of Fruit Food items. This includes Bananas, Coconuts, Pomegranates, Mangoes and Pineapples. No other Food or Resource items can be put inside the Crate. Fruit Crates can be found on the Seas with Fruit already in them.

Player Crews can occasionally find Trade Good Commission Quests from Tattered Parchments, Messages in a Bottle or Mysterious Journals that require the delivery of a filled Fruit Crate to a specific Outpost Senior Trader by a specific date and time. With this Quest present, Players can pick up an empty Fruit Crate from any Senior Trader.

Fruit Crates can be used as portable Food containers to have easier access to healing items.

Fruit Crates can be found from the following sources:

Fruit Crates that are filled with 50 Fruit can be sold to:

The following is the reward chart for the sold uncommissioned Crate:

If Crews have an active Crate of Fruit Trade Good Commission in their Map Radial Menu, they can sell a Fruit Crate to the specified Senior Trader for nearly double its Gold, Reputation and Emissary Value. This bonus does not apply when sold to the Reaper's Bones Company.

The following is the reward chart for the sold commissioned Crate:

Here is the Pirate Chat Wheel of the Crate: 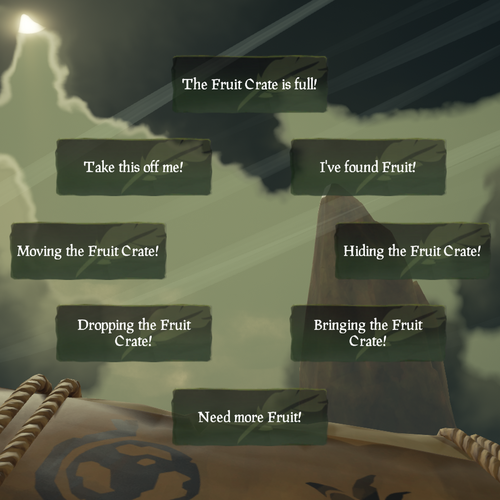