A Gamertag is a player's Xbox username and the name they are identified by in Sea of Thieves.

Sea of Thieves uses an Xbox Live account to sync player progress across Xbox game consoles, and Windows 10 versions (both Steam and Microsoft Store). A Gamertag is always displayed above a Player Pirate if they are in close proximity. Some cirsumstances will hide a Gamertage, such as if one player is under water while the other is above, or during the use of some emotes. Titles can be displayed below Gamertags, which are equipped in the Vanity Chest once unlocked.

Gamertag colour will depend on the following: 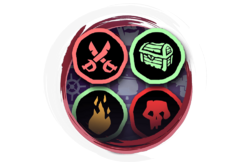 Crew Status Tags (found under Settings > Gameplay) is an option that displays the current action of a Player Pirate next to their Gamertag. These appear as small circular icons beside the names of your Crew Members.

The following Actions are displayed with the Crew Status Tags:

As well as the addition of an icon, the Crew Status Tags option also allows a Player Pirates Gamertag to be displayed from further away and through any obstacles.

Replace Gamertags (found under Settings > Gameplay) is an option to replace all Gametags with pre-made names. This is often referred to as "Streamer mode" as it helps streamers preserve the anonymity of themselves, the players in their crew, and players they encounter to prevent harassment and stream sniping.

Most of these names are references to characters or things from Sea of Thieves lore.

Gamertags can be hidden by using "Toggle HUD" but first requires a Controller or Keyboard bind to be set under the appropriate Game Options menu. This also hide all other HUD components such as interact prompts, health and ammo, and radial menus.

Players can check the Reputation of their account at The Xbox Reputation Page. Here players can see how many times they have been reported and for what reason, which makes up their reputation.