Getting Started is a quick guide and overview of Sea of Thieves. This game is exclusive to Xbox (One, S, or X) and Xbox Play Anywhere (PC requires Windows 10 Anniversary Edition or later). It supports solo, 2, 3 and 4 man teams. Play with Xbox friends or allow the game to select random players via matchmaking to fill the crew. When a player leaves, another will take their place, unless closed crew is enabled.

Sea of Thieves is about exploration and discovery with a pirate-y twist. After gaining a sea-worthy vessel, players will embark on an adventure, traveling to unknown territory and competing for treasures untold. Use maps and solve riddles to find buried chests, then carry them back to the ship and sail them to town to trade for gold, find and delivery cargo to merchants as well as destroy Skeleton Captains. Use the earnings to purchase supplies.

While far from the only danger, PVP (player vs player) is a major mechanic in Sea of Thieves, and those rowdy pirates will do anything they can to end your life and steal your new-found wealth. Turn about is fair play (and completely expected!). Use gold to upgrade ships (albeit only cosmetically, like every other in-game upgrade), and hunt down those scallywags.

When players first enter the game, they will need to select how they will play. Initially, a 1 - 2 private player team could only choose a sloop, but that has since been changed, and players can now choose either ship. Sloops can have teams of up to two players, while galleons can have teams of up to four players. Brigantines are the ship in between the two and have strengths and weaknesses adjusted accordingly, they carry teams of up to three players. Handling a galleon solo can be very difficult, especially for new players. Players who are expecting multiple friends to join them after the game has started, may want to choose the galleon or brigantine initially to make sure that there is plenty of space for everybody.

After setting up a team (or going solo), players will spawn at an outpost, a sort of 'safe zone' which is only safe when you first spawn, after that, players can arrive and find you. Safety is only temporary. As they start to explore, other players may be seen and contact can occur or be avoided. The player's map will be limited to a set amount of users to avoid overpopulation. 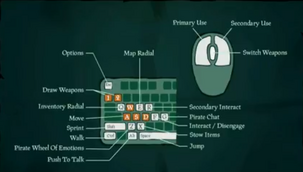 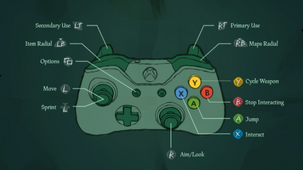 Combat is action based as there is no 'tab targeting' available. Keep in mind that different weapons have different ranges. The Cannons need to be loaded with ammo (or players if using it to leave the ship) and aimed at the target. In order to sink a ship, the vessel will need to take on water. Cannon shots that hit above the waterline will punch holes into the hull and deck, but are not nessessarily an immediate concern for the enemy. It is better to try and shoot below the waterline to cause more damage. Shots through the same hole will not do additional damage but can stop a player who is attempting to repair it.

While at an outpost, be sure to check the area for other boats. It's probably a good idea to leave someone on the ship to keep watch. This works better obviously with a full crew. If another ship is near, players may want to stay further away from shore and potentially lure the curious and bloodthirsty enemy pirates away while the rest of the team runs the booty to the shore and turns it in. Other options could include having a single player swim and board the enemy ship to kill their spotter, or use them as a decoy. If your crew has any gunpowder barrels it can be a good idea to drop them infront of the enemy as they act as mines in the water.

Tip: Proximity chat works for everybody, even enemy pirates. Try not to give your position away when adventuring on-shore.

Getting, Using, and Repairing a Ship

After spawning into the game, the player/team will find themselves in a Tavern. Preferably, check for items to gather before moving on. Locate the Gold Hoarders Shopkeeper in a tent, the Order of Souls underneath a building, and the Merchant Alliance on the dock. Talk to the shopkeeper to unlock a Voyage by spending gold. Once players have a Voyage in hand, look near the shoreline to locate a boat. Team boats will be easy to find.

Ships are powered by wind. The sails are tethered near the port and starboard sides of the vessel. Raise, turn, and lower the sails as needed for movement. Use the table map to pick a direction and use the compass located near the wheel to figure out which direction to go. Watch the compass and recheck the map as needed to ensure the correct direction is maintained. Shifting winds and rough waters can change a ships movement. Having all the sails open at once will make the ship faster, but harder to maneuver. Consider reducing the number of sails during ship to ship combat.

Ships are quite fragile and are susceptible to damage. Actions that can damage a ship include running over rocks or reefs, colliding with docks, shorelines, and other ship, and combat. A damaged ship can be repaired by covering holes in the hull with wooden planks (gathered by collecting them from barrels) and additionally removing any water using a bucket (located in the player's inventory). Shots taken to the hull below the waterline will cause a boat to take on water and potentially sink if ignored. A single player can repair up to five holes in a larger galleon successfully before needing to collect more planks, but more than that will require a second player to help, especially if water is involved. If the team and ship is smaller (duo or solo players), a single player should be able to handle repairs unless the ship has already taken on a substantial amount of water. If a boat sinks, a player will need to contact a Mermaid to spawn on a replacement ship, which will appear at a nearby island.

While enemy ships can be boarded, they cannot be stolen and claimed as dead players are returned to their original vessel. They will retain ownership of it even if the entire team has been killed.

There are two maps in the Sea of Thieves. One is a smaller one held by a player and the other is located on a table below deck on the player's ship. The map size may vary depending on ship size. To gain a new map, the player(s) will need to choose a Voyage, which will, in turn, unlock a map associated with the quest or riddle. For solo players, the Voyage will begin immediately. For teams, a Voyage vote will be needed. The associated map will reveal a location that players will then need to find on the table map. This will allows the players to see the direction in which they need to travel. An image representing their ship and it's current location is visible on the larger map.

Voyages often include finding Treasure Chests that can be turned in for money. These chests can also be found randomly through exploration on sunken ships and islands. If a ship is sunk, it's treasures will slowly float to the surface but upon reaching it, they will be surrounded by sharks. If not looted, the chests will eventually sink again, to be lost forever. When placing chests on a ship, it's a good idea to attempt to hide them, or at the very least, spread them apart. This will make them harder to get or find if a ship is boarded by enemy players.

Players will have access to the same weapons and equipment when starting a new game. These include the Cutlass, Flintlock, Compass, Lantern, and Shovel and they will be located in the player's inventory. These items can be managed while interacting with an Equipment Chest. There may be additional items as well. Currently, those items do not level up in an attempt to keep new players on a level playing field as players who have several hours into the game.[1] Additional clothing items are for sale as well. Lanterns work underwater and are great to use at night, but can be seen by enemy players from a distance, so only use them when needed or safe to do so.

Resources are additional items that will need to be gathered by the player. This includes bananas for eating (yes, skin and all), wooden planks for ship repair, and ammunition for weapons. Some items can be found in barrels on islands or floating in the water, or in storage containers on other player's ships. When leaving the ship to go to an island, be sure to have plenty of room available in your inventory if you plan to explore.

Death and the Mermaid

When a player is killed, they become a ghost and are taken to the Ferry of the Damned. To re-spawn, exit through the captain's cabin door when it opens. Players will return to their ship. If a player is in the water and wanders too far from their vessel, or gets left behind, a Mermaid can be used to return the player to the ship. If a player falls overboard from a moving ship, it may be easier to distance themselves and locate a mermaid for transport, than have teammates attempt a rescue. The downside is the risk of getting eaten by sharks.

If a ship has sunk, contact a Mermaid to spawn on the replacement ship. Mermaids are generally easy to spot due to the flare held in one hand that produces a smoke stream easily visible in the sky.

Players who misbehave (or for whatever reason the rest of the team chooses) can be placed in the Brig. The only way out of the Brig is through vote or by leaving the game. While in the brig, the player can be splashed with buckets of vomit, that can be created by players who have drank too much Grog .

In Sea of Thieves, this applies to ANY time of day or night. Some have found out the hard way what happens if players venture too close to the edge of the map. Clouds move in, the skies turn red, and the sea literally destroys your ship. Holes abound, and water pours in. Chasing unsuspecting foes into it may be fun, but players will want to take care they don't get caught themselves.

Retrieved from "https://seaofthieves.fandom.com/wiki/Getting_Started_in_Sea_of_Thieves?oldid=7578"
Community content is available under CC-BY-SA unless otherwise noted.