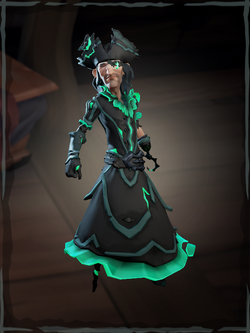 The Full Set with the Ghost Dress.

Ghost Pet Outfits can be bought for Pets at the Pirate Emporium for Ancient Coins by anyone who has reached the level 20 Reputation Rank with Athena's Fortune.

The Ghost Set is one of the more expensive Sets in the game.

Ghost Items that have a Rank unlock requirement can be purchased by non-Pirate Legends.