The Gold Hoarder, also known by his human name Rathbone, is a Skeleton Lord with insatiable greed that created The Gold Hoarders Trading Company. He is featured as a final boss in Shores of Gold and Dark Brethren.

First steps into the Sea of Thieves[]

As a part of Ramsey Singh's crew aboard the Magpie’s Wing, Rathbone was one of the first known pirates to discover The Sea of Thieves. Rathbone spent much of his time complaining about Ramsey's objectives, which took away from hunting for the bountiful riches across the Sea of Thieves.

While Ramsey's idea of making pirating within The Sea of Thieves a "fair business", Rathbone rejected this idea and started stealing treasures with the intent to sell them to the outside world. Rathbone's dislike for Ramsey's grand ideas came to a head when a Kraken attacked Golden Sands. The crew of the Magpie's Wing fought fiercely, causing the Kraken to retreat. Ramsey was nearly dragged off the ship, until Rathbone caught his hand. It was at this point, he revealed to Ramsey that he had planned the plundering of Thieves Haven, where all their personal belongings had been taken. Along with this, he had betrayed him after they returned from their first trip to the Sea of Thieves, where he gave Stitcher Jim a map to navigate the Shroud. Rathbone stole the skeleton keys from Ramsey, which the captain had crafted as the only means of accessing the treasure chests, and plucked Ramsey's wedding ring from his finger, sneering about how little Ramsey cared about his wife. Ramsey attempted to grab Rathbone but his hand was released, falling into the waves below. Rathbone sailed the Magpie's Wing back to port, telling the denizens of Golden Sands about the Pirate Lord's valiant sacrifice, then slipped away, returning to Stitcher Jim and his gang. Rathbone then spent several years gathering Ramsey's treasure, with his gang being so wealthy, they came to be known as the Gold Hoarders, unofficially.

Founding of the Gold Hoarders[]

Rathbone would realise the time it took to gather the treasure was high. He then started the Gold Hoarders as a company that collected treasure from across the Sea of Thieves. The goal was to spread out the skeleton keys to a representative on every outpost, sell maps to pirates and have them return the chests, rewarding them with a cut of the contents. This had revolutionized how the Gold Hoarders operated.

Rathbone is reborn as The Gold Hoarder[]

Around twenty years later, Rathbone heard about a Legendary Island beyond the Devil's Shroud filled with Gold. One way or another, Rathbone found the island, and wanted to take the Gold for himself. He ventured onto the island, eventually breaking into a vault with a hoard of ancient gold and a throne, known as the Belly of Gold. Rathbone, as greedy as ever, stuffed his sloop with the gold, so much so that the ship sagged in the water from the immense weight. Even further, he shoved on as much jewellery as he could. Little did he know, the gold was cursed, turning his arm solid gold. This still didn't dissuade Rathbone, as he left Tribute Peak to return to his estate.

It was during his return trip, that he was ambushed by two Galleons, who forced Rathbone to drop anchor. The captain of one of the vessels, Eli Slate, ordered him to surrender, lecturing about his greed. Three gunpowder barrels were placed in the water to blockade the sloop. It was then revealed to Rathbone, that Mercia was aboard Slate's ship, where he noted time had put a white streak in her blonde hair. Mercia shot the kegs with her Eye of Reach, sinking Rathbone's sloop.

Rathbone sank to the depths, fumbling in the inky darkness for his gold, grasping at his fortune to fill the void where his soul had been. It was at this point, the curse had transformed him, granting him immortality at a terrible price. The Gold Hoarder was born, as Rathbone died.

The Gold Hoarder returned for his treasure, dredging it up over months or even years, where he would retire to his throne in the Belly of Gold.

Some years later, the Pirate Lord ventured to Tribute Peak, to speak one final time to the Gold Hoarder. Ramsey informed him of his retirement and his plans to begin Athena's Fortune. Ramsey apologised to the Gold Hoarder, for not being a good captain, for not being able to show him there's more to the world than treasure and he was sorry that they couldn't be friends. He noted that the Gold Hoarder was wrong, for betraying his crew, wrong for only thinking about the reward at the end of the voyage and wrong to think the Sea of Thieves exists for him to make a profit.

As the Pirate Lord left, the Gold Hoarder was inconsolable, letting out a scream in sheer frustration.

During the events of Shores of Gold, he returns to Tribute Peak and fortifies his inner sanctum with Puzzles and Traps to personally protect his hoard of Gold. An unnamed crew ventured to the Belly of Gold, after returning the Shroudbreaker to its former power. They overcame the Gold Hoarder's puzzles, worked their way through his traps, culminating in a battle in the Throne Room. They defeated him, retaining his skull which was then sold to the Order of Souls.

A year or so later, through unknown means, the Gold Hoarder had been revived. It was then he allied with Davy Jones and the Dark Brethren, due to being offered Hernan Cortez's cache of cursed Aztec Gold. The Gold Hoarder, now mottled and covered in seaweed and coral, met with the Dark Brethren in the Siren Fortress. Following the meeting, himself and Davy Jones performed the Ritual of Thieves, while fighting an unknown crew and Jack Sparrow. The Ritual was a success, with the Gold Hoarder holding the crew off long enough for Jones to summon the Siren Spire.

It is unknown if the Gold Hoarder survived this encounter. 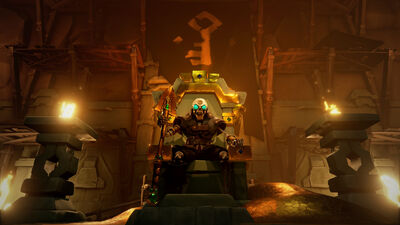 The Gold Hoarder can be encountered during the Shores of Gold Tall Tale, where he acts as the final boss of both the Tale and the Story arc. Players will first have to navigate to Tribute Peak, solve all of its puzzles to gain access to the inner sanctum, then get through all the Traps and waves of Skeletons until they make it to the Throne Room. Once a player enters the room, Gold Hoarder will appear and the whole crew will be locked to respawn in the throne room until the Gold Hoarder is defeated.

The Gold Hoarder can also be found in the Coral Fortress for the "Dark Brethren" tall tale, where he acts as the final boss of that tall tale. Players will have to go to the Coral Fortress, where they will go through Traps, puzzles, and Ocean Crawler fights, until making it to the Dark Brethren, where you see the Gold Hoarder amongst Davy Jones, Wanda the Warsmith, and Duke. When they vanish, players follow a couple more Traps until getting to a "ritual" room, where players will see Davy Jones with the Gold Hoarder, in which he will attack. Although players do have to fight the Gold Hoarder, he is impossible to kill, as he escapes at the end of the fight.

The Gold Hoarder acts virtually the same as the other Skeleton Lords of the Shores of Gold Story arc. He has a large amount of health and a range of various Skeleton Lord abilities at his disposal. He can: