The Kraken Set is a Purple, blue and orange coloured Cosmetic Set in Sea of Thieves. As the name implies, the set is themed after the Kraken. This Set is mostly locked behind Commendations and was initially only available from the Shops at Morrow's Peak Outpost in The Devil's Roar. The Set was made available in all Outpost Stores with the release of the Anniversary Update. These Set items cost a bit more than regular Outpost Cosmetics.

A more expensive red and black recolour, called the Inky Kraken Set can be purchased from the Black Market for Gold.

The Hair and Beard of the Kraken Set are available for purchase for Pirate Legends from the Shopkeeper of Athena's Fortune Hideout. 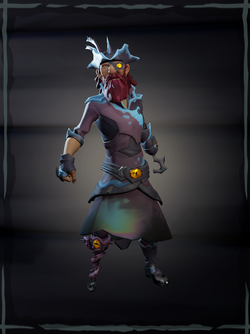 The Full Set with the Kraken Dress.

Kraken Ship Set on a Galleon.

Kraken Ship Set on a Brigantine.

Kraken Ship Set on a Sloop.