Difference between revisions of "Legendary Set" 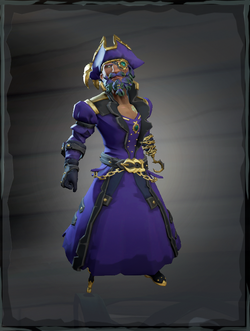 The Full Set with the Legendary Dress.

The Athena’s Fortune Inaugural Guardian Sails on a Galleon.

The Athena’s Fortune Inaugural Legend Sails on a Galleon.

The Legendary Set is a Cosmetic Set devoted to the Pirate Legends of Athena's Fortune in Sea of Thieves. The Set mainly features rich Purple tones adorned with Gold and the Jade Reaper's Mark modeled after the Pirate Lord's necklace.

Legendary Clothing and Vanity items are given for free to any Player Pirate to become a Pirate Legend. This Title is only given to Pirates who have proven themselves to receive Rank 50 Promotions with three Trading Companies. The Equipment, Costume, Weapon and Ship Cosmetics can be purchased from Athena's Fortune Shop at Athena's Fortune Hideout, with some of them requiring the completion of various Athena's Fortune Commendations to be unlocked. Pirate Legends can also buy Pirate Legend Pet Outfits for their Pets from the Pirate Emporium for Ancient Coins.

Some Legendary Set items received a "Golden" version that were given out to any Players who reached Pirate Legend status before the first Anniversary of the game.

Two Inaugural Sails, along with two new cosmetic rewards introduced each season, are rewarded for any Pirates who make it into the two top Emissary Ledger Tiers by the close of a ledger.