Legends of the Sea

Help Umbra chronicle an ever-growing list of legends - pirates just like you who left their mark on the Sea of Thieves.

Legends of the Sea is the name of a Bilge Rat Adventure released as part of the January 2020 Legends of the Seas update for Sea of Thieves. The Adventure takes Players to Lagoon of Whispers where Umbra has set camp and is collecting Tales of Legendary Adventurers, that are immortalised all over The Sea of Thieves, in exchange for unique Tattoos in honour of these legends.

Umbra has appeared in The Sea of Thieves on Lagoon of Whispers, chronicling stories of various Legendary Player Pirates to have left their marks here. With the Legends of the Sea (Content Update), every major Easter Egg in Sea of Thieves has been made interactive. Once inspected, they provide the story behind these in-game immortalisations along with Commendations, which unlock various unique themed Tattoos for purchase from Umbra. The locations of the Easter Eggs are hinted at in the Legends of the Sea tab under the Bilge Rats Commendation menu. Additionally, Umbra has left 10 Journals all across The Sea of Thieves documenting the changes to Sea of Thieves in past Bilge Rat Adventures.

There are three Journals on Lagoon of Whispers written by Umbra that tell of her story and motivations. Note that these Journals have no Commendations tied to them, they just provide background to how Umbra made it to The Sea of Thieves.

There is a journal here, hand-written in a hasty fashion.

I've been captured by pirates... again! Just my luck. I overheard the crew discussing their plans, looks like I'm heading back to the Sea of Thieves. I must embrace the path that destiny has put before me. I'll let these fools navigate the Shroud, then I'll escape once we're safe. Second time I've been caught by pirates and dragged here... perhaps I'm where I'm meant to be.

This journal is written in a steady hand, by someone taking their time.

Now that I've set up camp, this place feels more like home. But, if I'm going to stay, I'll need to go and get more supplies. I'll go soon. Listening to my captors' tales of legendary deeds has got me more intrigued. I'd love to document the weird and wonderful people who live here! I should research these legends. But first, I will record the full tale of my arrival. Fortunately, running out of paper is no problem for me...

This journal talks about a daring escape.

Notes for my life story: Once through the Devil's Shroud, I waited until the crew had drunk themselves silly in celebration. I escaped the brig by regaling my jailor with one of my most exciting stories. Once he came closer, he was already done for! I snuck onto a rowboat and made it here. As I rowed away, I noticed that the Shroud ate a huge hole in their ship. I doubt I'll see them again.

Legends of the Sea Journals[]

There are 10 numbered Journals written by Umbra hidden in specific locations related to past Content Updates, chronicling the changes made by those events. These books have Commendations tied to them, rewarding Doubloons upon first reading them.

Find Umbra's book on Devil's Ridge, overlooking the sea. The Journal is on a southern rock formation.

This book is about the arrival of The Hungering One... signed by ‘Umbra’.

After asking Merrick himself, deciphering his drunken journals and speaking to pirates who were there, I believe this is it.
This is where they used Merrick’s accidental enchanted Shanty to summon forth the first Megalodon - The Hungering One!
Those pirates avenged poor Merrick’s crew, not to mention his legs. But now all of the ancient, deep sharks have awoken... 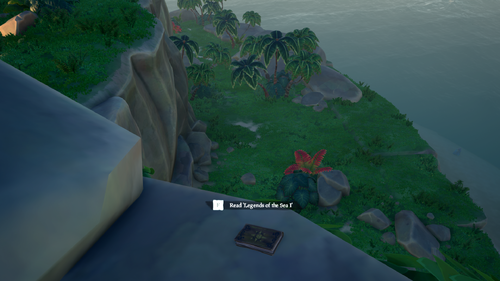 Find Umbra's book on Crescent Isle, where Salty once rested. It is near the southern cave entrance, found in a broken barrel.

I met Salty - a genuine skeletal parrot! He was once a man, but was changed when creating Cursed Cannonballs from one of Flameheart’s Cannons.
His partner in alchemy was the weaponsmith, Wanda, who forced him to take the brunt of the curse. But she did not escape unscathed.
Flameheart’s hatred fed her own, until she became the twisted Skeleton Captain, ‘The Warsmith’. She waged a failed war on the Outposts. 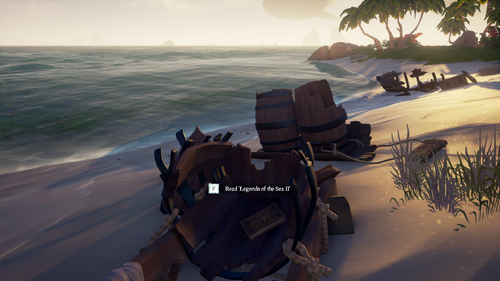 Find Umbra's book on The Devil's Thirst, at a small camp. The Journal is in the turned over ship’s hull, right below an Ammo Chest.

This book is about the fate of the Forsaken Shores Alliance... signed by ‘Umbra’.

When Grace Morrow and Stitcher Jim joined their crews to form The Forsaken Alliance, they travelled to places few pirates had seen.
They even reached The Devil’s Roar thanks to the Shroudbreaker, but Stitcher Jim was secretly seeking power for his then-master, the Gold Hoarder.
He betrayed and killed all of them but Captain Morrow, who survived her poisoning but was trapped in the Roar. A dark tale indeed. 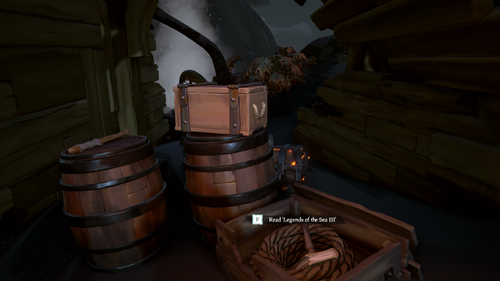 This book is about the Festival of the Damned… signed by ‘Umbra’.

This was no easy spot to reach! During the Festival of the Damned, pirates would light these Beacons with various coloured flames.
How incredible that the Ferryman allowed access to the Flames of Fate, which change to reflect how a pirate dies.
I’d like to learn more about them… but I’m not rushing to the Ferry of the Damned. What if I don’t come back? A chilling prospect. 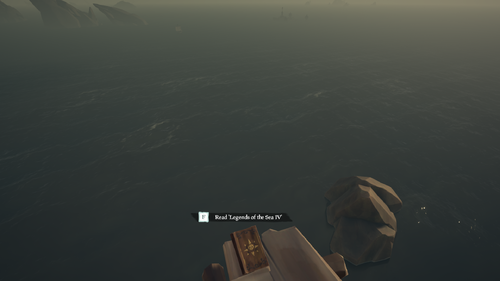 Find Umbra's book on Kraken's Fall, near a camp to the east (South of the large camp) and the remains of a Kraken. Inside a Kraken’s vertebrae close to the NPC camp.

This book is about the hunting of Krakens… signed by ‘Umbra’.

The Fogs on the Sea of Thieves are heavy, but were especially bad during a certain year. They seemed to stir up the Krakens and Sharks.
Perhaps those creatures just saw a chance to prey on lost ships, but the tables soon turned as pirates realised something...
Many Krakens and Megalodons eat up valuable loot from the ships they sink. Suddenly, hunting them for goodies became a tempting prospect! 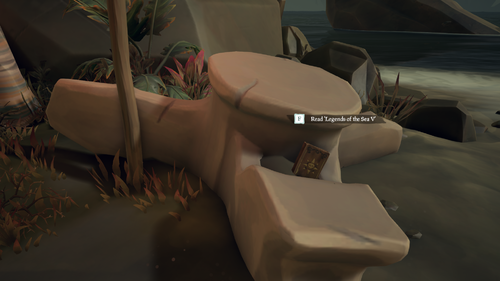 This book is about a man named 'Ramsey' and the Gold Hoarder... signed by 'Umbra'.

It seems that the feared Gold Hoarder, a great Skeleton Lord who amassed great wealth through the Gold Hoarders Company, was recently defeated.
Many pirates travelled far and braved terrible traps, Skeleton Lords and more to rebuild the Shroudbreaker and reach his island.
The Hoarder was once a man, until his greed took over. His friend Ramsey was forced to turn his back on him. Could Ramsey in fact be...? 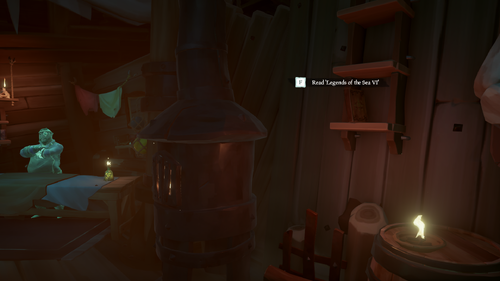 This book is about Duke selling gunpowder to the Trading Companies… signed by ‘Umbra’.

The skeletons once began hoarding huge amount of Gunpowder, known since as ‘Black Powder Stashes’.
The Trading Companies didn’t like that, so Duke of the Bilge Rats saw a chance to make the seas safer while also making a lot of gold.
It seems this was Duke’s first step towards acquiring the connections and capital needed to launch the Black Market. 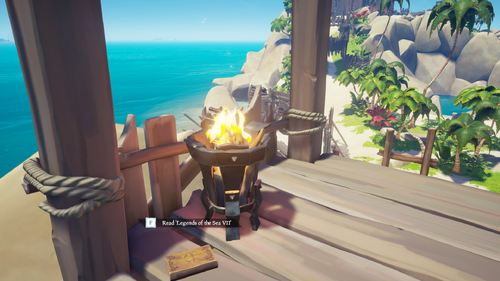 Find Umbra's book on Shipwreck Bay, tucked away inside a wreck. Inside the Blackwyche’s Captain’s Quarters, below the cornered armchair.

This book is about the theft of the Dark Relics… signed by ‘Umbra’.

I have found some strange artefacts, which I believe to be what the Order of Souls calls ‘Dark Relics’.
Many of these arcane objects were stolen from them in an organised effort by the Skeletons, though Duke was able to retrieve many.
The Dark Relics were later used for terrible deeds, opening windows to other worlds and dispelling powerful curses! 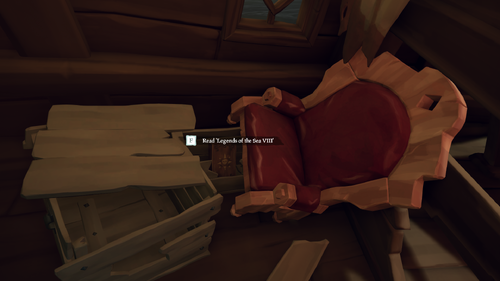 Find Umbra's book at The Wild Treasures Store, a Seapost out in The Wilds. The journal is under the hammock.

I’ve come across strange activity by Duke. It seems he got much of his Black Market stock from these accursed Reaper’s Chests.
The things he couldn’t use - piles of bones, mostly - he sold on as Rag and Bone Crates. Strange what people will do to make their way.
These Pirate Emporium folks, for example. Once Gold Hoarders, now working for some outsider. But such delightful pets they sell! 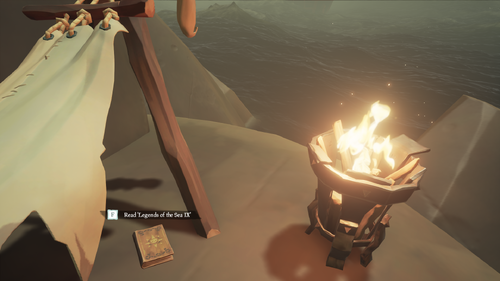 Find Umbra's book in the Fort of the Damned, discussing the supernatural. On the western climbable watchtower by the Fortress structure.

This book is about the appearance of the Fort of the Damned... signed by 'Umbra'.

Stitcher Jim believes that the appearance of the Fort of the Damned is the result of a ritual using the stolen Dark Relics.
Pirates have found that the coloured Flames of Fate can be used to 'wave' the twisted Fort and repel the skeletons seeking to use it.
But what's really going on? Such determination to get into our world... but are we stopping them or helping them by waking the Fort?! 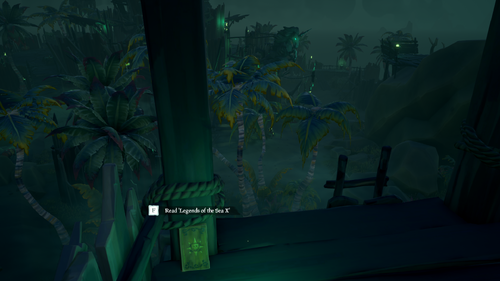 The Legend of Glitterbeard Journals[]

The Easter Eggs are categorised into 10 groups, each group consisting of 5 stories of Legendary Pirates from across The Sea of Thieves. Upon interacting with these Easter Eggs, player will receive Commendations and can unlock special Tattoos for purchase from Umbra.

For a list of all the immortalisations, see Easter Eggs.

For a map of all the Easter Egg locations, players can visit the RareThief Interactive Sea of Thieves Map and check the boxes under Legends of the Sea.

After completing all the Commendations in each group of Easter Eggs, players will unlock unique themed Tattoo sets for purchase from Umbra:

The following are all the Commendations related to Legends of the Sea:

Legends of the Sea Books:

The Sea's Most Wanted: