The Sea of Thieves Map[]

The Sea of Thieves is a location that is still being charted and discovered and as such, any Maps of the Region are bound to have inaccuracies or be outdated. 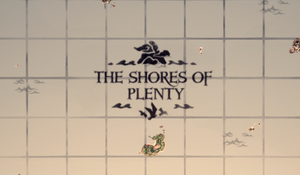 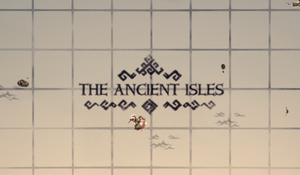 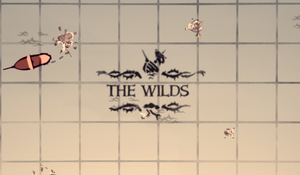 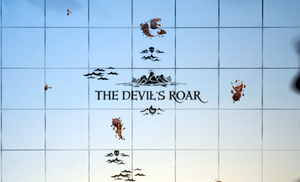 The Sea of Thieves map is currently divided into four Regions with the dangerous Devil's Shroud surrounding the edges of the map. Each Region is intended to have its own distinct theme and feel.

The Shores of Plenty[]

The Shores of Plenty comprises the North-West portion of the Map. It is composed mainly of tropical small sandy cays and islands with white sandy beaches and lush palm trees. The Sea of Thieves developers have stated that this region's feel was inspired by the Caribbean during the Golden Age of Piracy, along with a touch of Disney’s Pirates of the Caribbean films. The Shores of Plenty Region is tied to the Merchant Alliance.

The Ancient Isles comprises the Southern and South-Western portion of the map. It is composed mainly of large islands lush with greenery, rock monuments, hidden cave structures and ancient hideaways of pirate crews that used to sail these seas. The Sea of Thieves developers have stated that this region's feel was inspired by the Indiana Jones film franchise, in terms of adventure, exploring ancient ruins, and solving their mysteries; along with old swashbuckling adventure stories and pirate legends. The Ancient Isles Region is tied to the Gold Hoarders.

The Wilds comprises the North-East portion of the map. It is composed mainly of semi-fortified, "haunted" and deserted islands containing the remains of deceased pirates. This region is dark and cloudy, with the flora of the islands being largely wilted. The Sea of Thieves developers have stated that they wanted this region to feel darker and more threatening, with near-permanent cloud cover and native plant life slowly withering and dying. The Wilds Region is tied to the Order of Souls.

The Devil's Roar comprises the South-East portion of the map. It is composed mainly out of volcanic islands covered with half-burned plant life and strange red crystal growths. The Devil's Roar is a deadly stretch of ocean pockmarked with volcanic elements, threatening all ships that pass through. There are caves dotted around the area that offer little protection, but with constant Earthquakes and erupting Geysers and Volcanoes, nowhere else is truly safe. The Devil's Roar has its own high risk, high reward Voyages that can only be purchased at the only Outpost in The Roar, Morrow's Peak Outpost.

The No Man's Sea is the large Open Sea in the middle of The Sea of Thieves that is not a part of the other Four Regions surrounding it. Despite the Sea Dogs setting up their Tavern and Arena at the large peak (called Arches Peak by the community) in the middle of these wild waters, none of the Islands or landmarks in the area are charted on any map, nor are these seas under any one Company's control. There are three Locations in No Man's Sea: Uncharted Island (K-9), The Glorious Sea Dog Tavern and The Reaper’s Hideout. While Uncharted Island (N-13) also seems to be here, it is home to Wildsplashes indicating that the Island is in The Wilds instead. No Man's Sea Islands are not home to any Regional Fish types, thus making them ideal for catching non-regional fish variants such as Shadow Stormfish or Twilight Stormfish inside Storms.

The Reaper's Hideout acts as a Fortified base for the Reaper's Bones Trading Company, who wish to oppose all of the other Trading Companies, especially Athena's Fortune on the Sea of Thieves. The hideout acts as a Dock, resting spot and a proving grounds for true pirates. The Company's only representative, The Servant of the Flame can be found here, who is willing to accept any and all Treasure, especially the remains of Emissary Ships. 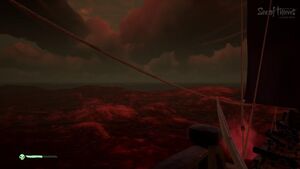 The Devil's Shroud, also better known by its community given name The Red Sea, is a shrouded boundary of the Sea of Thieves as an effective barrier for those who venture out.

Anyone who enters becomes disorientated and will end up lost within the fog, while it slowly corrodes all not-living organic matter and man-made materials that it touches.

Currently, only one method can be used to dispel the Devil's Shroud: The Shroudbreaker.

The Shores of Gold[]

The Old Sailor Isle is a large Island hidden at the very edge of the Shroud. This is an Island where most Pirates who attempt to take the journey to The Sea of Thieves end up. It offers a small respite, while showing Pirates what the Sea of Thieves is all about. Most shipwrecked pirates will find the Pirate Lord here to guide them through their Maiden Voyage.

This island does not exist in the main space of the game.

Sea of the Damned[]

Main article: Sea of the Damned

The Sea of the Damned is a ghostly realm of the dead visited in A Pirate's Life and Captains of the Damned Tall Tale. This is also the sea in which the Ferry of the Damned sails, ferrying the souls of deceased pirates back to the land of the living. It is not located inside the Sea of Thieves, nor behind the The Devil's Shroud, but is accessed via the Tunnels of the Damned.

Outposts are the main inhabited Islands of The Sea of Thieves, housing a Tavern, various Shops, Trading Company Representatives, Emissary Tables for the companies and a port for a crew's Ship. Every game session begins and mostly ends at an Outpost as this is where players can acquire Voyages or turn in their Treasure for rewards. There are no natural Enemies on Outposts apart from enemy Pirates who may want a part of the crew's hard earned Treasure and Resources.

Inside the Taverns of every Outpost, those who know the Shanty of Legends may gain access to the hidden Athena's Fortune Hideout, where only Pirate Legends are accepted. This Hideout is the main hub for the Athena's Fortune Trading Company, who offer Legendary Pirates Legendary Voyages and Legendary Cosmetics.

Seaposts are small rock Islets with a single Trader's Shop each who offer 5% discounts on a selection of three random items that change every midnight. Seaposts also house the Representatives for The Hunter's Call Trading Company who peddle in rare or common Fish and Meat.

Fortresses are highly fortified Watchtowers, similar in size to Outposts. Most of the time, these Fortresses are abandoned and are quiet with a large number of Barrels with ample Resources and even left-over Gunpowder Barrels. However, at any time, one of the Forts can be taken over by hordes of Skeletons during a Skull Fort World Event. These Skeletons, led by a Skeleton Lord, will man the fortifications and try to keep anyone away from their treasure filled Fortress Vault.

Fort of the Damned[]

The Fort of the Damned, previously Old Boot Fort, is a special Skeleton Fort shrouded in eternal Fog, where Player Crews can perform a ritual to summon the Ghost of Graymarrow, a Skeleton Lord who hides high value riches in the Fort's Vault. To access the forts hidden treasures you must claim all six flames of fate and a ritual skull.

Islands are wild and uninhabited. There are three types of Islands Large Islands, Small Islands and Uncharted Islands. These can hide Barrels worth of left-over Resources and buried or forgotten Treasure. These Islands are home to natural Wildlife and even cursed Skeletons. These Islands are the main targets of Voyages issued by Trading Companies who dare not venture into these perilous locations themselves.

There are a number of Islands in The Sea of Thieves that are as of yet not charted on any Maps. These Islands are not targeted by Voyages, however they may be inhabited by various people or even hide various legendary secrets that can only be accessed through investigating Tall Tales.

Shipwrecks are sunken ships that contain large quantities of Resources (even Fish & Meat!) and various types of sunken Treasure. These can be located by large flocks of Seagulls flying above them.

In the Devil's Roar, each Large Island is home to an active Volcano, however there are five additional documented Sea Volcanoes that can erupt at any time and easily take down any Ships in the vicinity. Most are positioned such that multiple small islands are within the range of their eruptions. Sea volcanoes can be found at X-12, V-15, Y-19, V-20, and Y-25.

The Ferry of the Damned[]

This Ghost Ship in the other world is the Locations where any dead Pirates of The Sea of Thieves are cursed to end up in after death. Any Pirate who is sent here will have to stay there until they are fit to be resurrected.