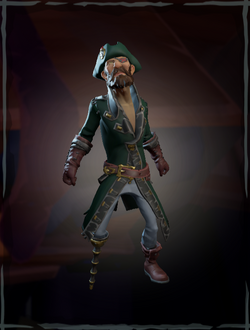 The Mercenary Clothing Set on a male Pirate.

The Mercenary Ship Set on a Galleon.

Mercenary Ship Set on a Galleon.

Mercenary Ship Set on a Brigantine.

Mercenary Ship Set on a Sloop.

The Mercenary Set is a set of cosmetic items for elegant sell-swords who like to show off their wealth gained from the Mercenary Voyages of the Bilge Rats.

The set has a Scorpion motif and a colour palette of green, red, gold, and white. The Black Dog Set, Silver Blade Set, Golden Banana Set, and Aristocrat Set share similar base models for many of their items.

The clothing, eyepatch, pegleg, pistol, and compass, were originally exclusive to purchasing a 3-Month pack of Xbox Live Gold during March 2018. In 2019, these items were given out to players who had used a Friends Play Free event code. This caused an uproar from existing players and Rare eventually released the items to all players, purchasable at the the General Clothing Shop and Equipment Shop.

All additionally released items have been available as Time-Limited Items, available for purchase from Duke with Doubloons after completing certain Mercenary Voyage Commendations during the span of several events.

The remainder of the Equipment and Instrument items were released in the Black Market with the Festival of Giving and Legends of the Sea Content Updates.

An eye-patch adorned with a scorpion tail has been teased by Rare, with little information regarding its release.