Pets are animal companions that can accompany Player Pirates on their adventures in Sea of Thieves.

Early Concept of a Pet Cat.

Pets were originally planned to be added as microtransactions in 2018, 3 months after Sea of Thieves release, however due to the community's concerns regarding the state of the game at release, Rare chose to rework their Content Update roadmap and postpone Pets in order to focus their efforts on releasing several free campaigns and updates. By 2019, Rare had announced that Pets would be arriving as part of a Mega Update, later renamed the Anniversary Update, to mark the game's One Year Anniversary. However, due to feedback from Player testing on their Insider Programme, Rare once again postponed Pets to work on bugs and user interactions. A few months later, Rare finally deemed Pets ready, and they were released as part of the Pirate Emporium grand opening in the September 2019 Content Update, Smuggler’s Fortune. The release came with two species types of both Monkeys and Parrots, offering a variety of colours to choose from. With The Seabound Soul Content Update, 2 new species of pets were added: the Marmoset and Cockatoo. 3 species of Cats were added during the Ships of Fortune Update: the Wildcat, Ragamuffin, and Mau. The September 2020 Vaults of the Ancients update introduced Dogs like Alsatians, Whippets and Inus to The Sea of Thieves.

Pets can be purchased from the Pirate Emporium with Ancient Coins. Ancient Coins can be acquired in Bundles in exchange for real money or as drops from the rare Ancient Skeletons that can spawn on Islands in both Adventure Mode and Arena.

When left by themselves, Pets will roam around the Ship and hang out on different perching spots when their owner is on board. When the owner leaves the Ship, pets will generally follow them around. Pets can be Picked up and placed by anyone. When picked up, Pets can be petted or shown off by raising them, after which they perform various actions.

Pets can get dirty after being shot from a Cannon. A dirty Pet will be nearly completely black from dirt or soot. Dirty pets can be cleaned with most sources of Water. 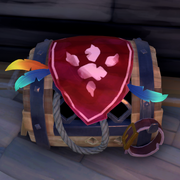 Players can browse for and Equip any Pets that they own at a Pet Chest. These Chests can be found on Ships or by the Pirate Emporium Shop on each Outpost. The Chests can also be used to equip and unequip any owned Pet Outfits on Pets.

Once equipped, Players can give their Pet a name to distinguish them from other Pets. Pets can be renamed at all times. An unnamed pet will simply show the pet’s species as its name.

If a player wishes to get rid of their Pet, they can simply unequip a Pet at the Pet Chest. 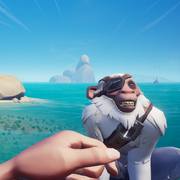 A Cloudy Capuchin being pet by the Player Pirate!

When left alone on a Ship, pets can pick any of the hangout spots to sleep or rest at, but they usually change positions or leave once their owner leaves the Ship. Some of these hangout spots are picked by the Pets themselves and cannot be interacted with by the Player. Any pets that have manually been placed on the Ship will stay there as long as it is deemed “safe” for them. Pets will leave a hangout spot and cannot be placed on top of it if the spot is submerged in water or the Ship has sunk.

The following is a list of all the hangout spots that Pets can be placed on. (Note that big pets like Cats and Dogs cannot use most of these):

Pets can also be fed any type of Food from hand. Simply hold out the Food item with Secondary Use pointed towards the Pet. Pets may or may not accept Food depending on their mood. Note that feeding Pets gives them no benefits whatsoever, effectively wasting a Food item, however Pets are willing to eat burnt Food. Pets will get sick and throw up when fed Bait. 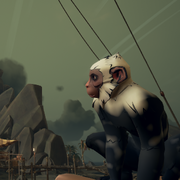 A Cloudy Capuchin dirty with soot.

Each pet has a variety of emotes they will perform when certain events occur around them.

There are three species of Monkeys in the game: the medium sized and short-haired Capuchins, the large and long-haired Barbarys and the tiny and nimble Marmosets.

The following are all the variations of the Capuchin Monkeys

The following are all the variations of the Barbary Monkeys

The following are all the variations of the Marmoset Monkeys

There are three species of Parrots in the game: the medium sized and bright Macaws, the small and vivid Parakeets and large and majestic Cockatoos.

The following are all the variations of the Macaw Parrots

The following are all the variations of the Parakeet Parrots

The following are all the variations of the Cockatoo Parrots

There are three species of Cats in the game: the rugged Wildcats, the stocky Ragamuffins, and the skinny Maus.

The following is a list of all the Wildcats

The following is a list of all the Ragamuffin Cats

The following is a list of all the Mau Cats 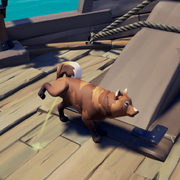 A Dog taking a pee on the deck of a Sloop.
Main article: Dogs

There are three species of Dogs in the game: Alsatians, Whippets and Inus.

These are Pets with special effects or skins that cannot be equipped with Pet Outfits regardless of their Species or Breed. The following is a list of all the Collector's Pets:

Pet Outfits can be purchased from the Pirate Emporium for 249 Ancient Coins each to add cosmetic clothing to your Pets. Pet Outfits come in Sets.

A specific Pet Outfit can only be purchased if you have that type of Pet in your Pet Chest. Collector's Pets already have unique skins and cannot wear any Pet Outfits despite sharing Species or Breeds with other Pets in game.

The following are the Outfits that Pets can be equipped with. Pet Outfits are purely visual and add no additional features to the Pets.