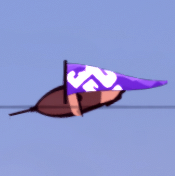 The Map Marker for Alliance Ships.

Player Alliance is a mechanic in Sea of Thieves that allows multiple ships to work together and share their loot.

To form an Alliance, a ship must first raise the "Offer Alliance" pennant Flag in the Flag Box. This flag can be recognized by its triangular shape and white and red colour scheme. Only one ship needs to sail the "Offer Alliance" Pennant. After this, any ship in the vicinity of the Alliance Pennant can create an Alliance at their Flag Box. The game will assign a name and flag to the Alliance and players from both ships will see a banner on their screens notifying them that an Alliance has been created, or that a new ship has joined the existing alliance. There is also an option in the flag box to leave the Alliance.

You can join in an alliance with a ship that's already sunk. Essentially, if the Alliance pennant is still visible above the water and you are in range to join the alliance, you can do it!

Various Commendations are tied to accomplishments achieved in Player Alliances:

Festival of the Damned