The Reaper’s Bones Inaugural Keeper Sails on a Galleon.

The Reaper’s Bones Inaugural Master Sails on a Galleon. 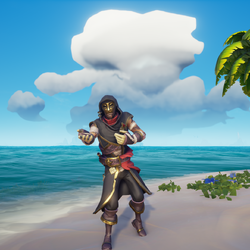 The Reaper’s Bones Costume in game.

The Reaper's Bones Set consists of various Cosmetics themed around the Reaper's Bones Trading Company. These Cosmetics can only be acquired through dealings with the Company, mainly via progressing through Reaper's Bones Promotion Ranks. This Set Consists of visually upgradable Cannons and Figureheads, a Costume and a full Ship Set. Note: Each Cannon or Figurehead Skin upgraded through Company Reputation levels will replace the previous version, making it impossible to retain the looks of lesser versions if purchased.

With the May 2020 Lost Treasures Content Update, four Reaper's Bones themed Emotes were added to the game as rewards for the time-limited Reaper's Rewards Challenges Event.

Two Inaugural Sails are rewarded for any Pirates who make it into the two top Emissary Ledger Tiers by the close of a ledger.