The Ritual Skull is an unique type of Bilge Rats Treasure in Sea of Thieves. These Skulls are necessary for performing rituals, such as the one to start the Fort of the Damned Island Raid Event. The Skulls are valuable to the Bilge Rats who are willing to buy them for Bilge Rat Doubloons. Alternatively they can be sold to the Reaper's Bones for Doubloons and Reputation instead.

On their own, Ritual Skulls act like any other Treasure items that can be found on the Seas and sold, but these Skulls also have the unique mechanic of being used in the ritual at the Fort of the Damned to begin the Raid and summon the Ghost of Graymarrow. In order to perform the ritual, Crews first need to gather all 6 different Flames of Fate Lantern flames from the Ferry of the Damned after dying in specific ways. These Flames are used to light 6 Ferryman Statues inside the Fort. After all six Lanterns are lit, the cage in the middle of the room opens up with a headless skeleton inside. When Players place a Ritual Skull on this Skeleton's head, the cage will close and the Raid event will start.

Ritual Skulls can be found from the following sources:

Ritual Skulls can be sold to:

The following is the reward chart for sold Ritual Skulls (only applicable when selling to the Reaper's Bones): 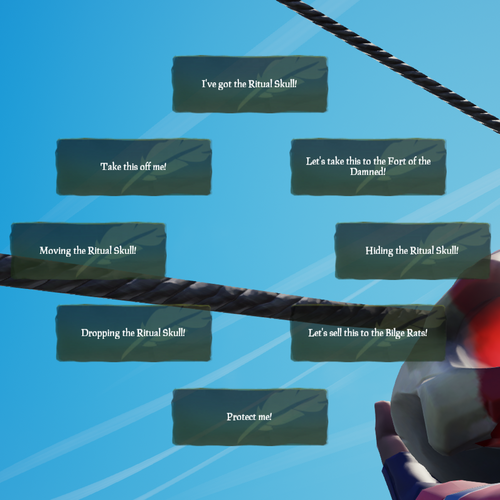 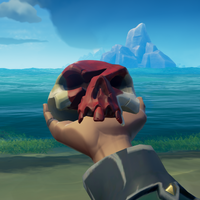 The initial appearance of the Ritual Skull was muted and lacked the red glow.

The Ritual Skull was originally introduced with the August 2019 Dark Relics (Content Update) as one of the six new Order of Souls Dark Relic Treasure Items and could be sold to the Order or Athena's Fortune for Reputation, Commendations and around 1200-4900 Gold. Dark Relics were discontinued with the following September update until the October 2019 Fort of the Damned (Content Update) that brought back just the Ritual Skulls as a way to start the Fort Raid Event. Initially these Skulls were gained from Mercenary Voyages or as a guaranteed drop for the new Emergent Skeleton Captain Skeleton's Orders Quests. This update also categorised the Skulls as Bilge Rats Treasures, allowing them to only be sold to the Bilge Rats for 10 Doubloons.

Ritual Skulls were removed from the Skeleton's Orders Treasure pool with the following November update and introduced as rewards for defeating Skeleton Ships and Skeleton Fleets. With the April 2020 Ships of Fortune Content Update, the Skulls could now also be sold to the newly introduced Reaper's Bones Company for increased reward multipliers when Crews are sailing as Reaper's Bones Emissaries.

The Skulls were added back to the Skeleton's Orders Treasure Pool with the June 2020 Lost Treasures Content Update that also made only one Skull Stash Voyage available for purchase per month.