A Skeleton Fort (also called Skull Fort after the cloud) is one of the possible World Events in Sea of Thieves, indicated by a large gray Cloud in the shape of a Skull. An active Skeleton Fort can appear at any Fortress Island (apart from Fort of the Damned, which has its own Raid event).

While normally dormant, a single Fortress on a server will occasionally appear with a large Skull Cloud hovering above it, visible from a distance. This indicates that the Fortress under the cloud has been invaded by a host of Skeletons who have decided to stash their Stronghold Treasure in the Fortress Vault. The size of the cloud determines its distance from a Player's Crew. The Fort of the Damned Raid encounter also has a Skeleton Skull Cloud, but it differs from a regular fort skull through its size and massive red eyes.

As only one World Event can be active at a time, a Skeleton Fort can only appear if there is no other large markers present in the skies, but there will always be an active World Event in each server. Between every World Event, one Ship on the open seas will get attacked by a Kraken. This also makes it usual for the Crew who cleared the last active Fort to be the first one to get attacked by the Kraken.

When left alone, an activated Skeleton Fort will dissipate in around 30 minutes, allowing for other World Events to cycle in. If an active Fort is approached, its timer will be reset, allowing for it to stay in the world for a longer time.

When an active Fort is approached, ominous music will start playing with all of the Fortresses Cannon fortifications becoming manned by Skeletons who intend to sink any Ships coming close to the Island. Once close enough to the Fort and outside the range of any Cannons, the player crew can attempt to raid the Fortress itself. This is done by taking on waves of Skeletons who are trying to defend the Vault at any costs. These Skeleton waves can be of any Skeleton type (Regular Skeleton, Plant Skeleton, Gold Skeleton, Shadow Skeleton) and be armed with all Weapons but not the Eye of Reach.

Once on the Island, players can take on the Fort event itself.

Each Active Fort has 12 waves of up to 10 Skeletons before the first Skeleton Captain is summoned at the central Fort structure. There are two types of Skull Forts: Forts that only spawn regular clothed Skeletons, or Forts that can spawn any type of Skeletons. No matter the type of the Fort, the Skeletons can usually only equip up to 2 Weapons of the following: Hands, Cutlasses, Pistols, Blunderbusses. In some Forts, around 1-3 Gunpowder Skeletons can appear as additional enemies. No matter the Fortress type, all Skeletons of these waves will have 100 Health (4 Cutlass swings or a point-blank Blunderbuss shot). The type of Fort spawns that players get do not seem to be tied to Crew size or Region. A wave is counted complete once all the wave's Skeletons have been defeated.

Note that aside from clothed wave Skeletons, Forts usually also spawn a handful of regular, white Skeletons with 100 Health. These Skeletons are not tied to the waves and usually man the Cannons and protect the shores of the Island. They will spawn when all Players have been sent to the Ferry of the Damned, allowing the Island to soft-reset.

An active Fort at Molten Sands Fortress will spawn Ashen Skeletons instead of regular Skeletons. These Skeletons are more resistant to Fire damage.

After the first Skeleton Captain wave has been defeated, the second boss wave will appear with yet some more Skeletons, but this time accompanied by two Ashen Skeleton Captains: An Ashen Key Master and an Ashen Guardian. These Captains are mechanically identical to the first wave's captain, with the main difference coming down to their Ashen Skeleton appearance.

The Ashen Key Master will drop a Villainous Bounty Skull and an Ashen Key upon defeat.

The Ashen Guardian will drop a Villainous Bounty Skull and Skeleton's Orders in the form of an X Marks the Spot Map on the same Fort with 1 X, uncovering an Ashen Chest. 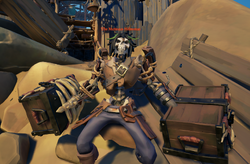 After the second Captain wave is completed, the final Skeleton Lord wave will commence. Aside from another group of Skeletons, one of the three fort Skeleton Lords can appear: The Mutinous Helmsman, The Two-Faced Scoundrel or The Duchess. The three lords are mechanically identical, having around 4000-4500 Health.

These Lords can switch between a Cutlass, Flintlock and Blunderbuss depending on their distance from Players. They can also summon more Skeletons (around 10 regular weak Skeletons with 50 Health), burrow into the ground and reappear elsewhere, and create a massive Shockwave, pushing any Pirates back and dealing damage to them the closer they are to them.

Players will know that the Lords are getting low on health when they start eating Bananas. This is just an animation and does not actually increase the Lord's health.

Once the Skeleton Lord is defeated, they will drop a Stronghold Key and an additional Stronghold Skull and Skeleton's Orders. The Orders give the crew an X Marks the Spot Map with 1 X that uncovers a Rag & Bone Crate. After the Lord is dead, the Skull cloud will dissipate, marking the end of the Skeleton Fort.

A Promotional Image of Skeleton Fort Events and its Stronghold Spoils.

The final Skeleton Lord will drop the Stronghold Key, which can be used to open the locked Fortress Vault below the main Fort structure. The Fortress Vault contains a large amount of loot with a guaranteed Stronghold level item of each type.

The Fortress Vault of an active Skeleton Fort will become locked until the Skeleton Lord is defeated and a Vault Key is acquired. An active Fortress Vault contains a large amount of Treasure, worth between 12,000 and 38,000 Gold.

The following Treasure is rewarded for completing a Skeleton Fort World Event:

The following Treasure (approx. 22 items) may be found within the Stronghold Vault:

All Skeleton Fort events are virtually the same, with the exception of an active Fort at the Molten Sands Fortress in the Devil's Roar, which has an active Volcano that can make things more difficult. The main differences of this Fort over the others is that the Skeleton Waves may spawn a wave of Ashen Skeletons who are resistant to Fire damage, the Treasure rewarded by the Skeleton's Orders map dropped by the Skeleton Lord Boss and a guaranteed Chest of Rage and Ashen versions of regular Treasure in the Fortress Vault.

The following Commendations are related to the Skeleton Fort World Event: