Skeletons are the most common enemy type encountered in Sea of Thieves. These cursed undead come in many forms, with varying strengths and weaknesses.

Skeletons are undead skeletal remains of cursed Pirate Crews who eternally haunt the uninhabited Islands of The Sea of Thieves ready to take down anyone who dares disturb their rest. The power of the Skeletons rests in their rank. Regular Skeletons make up the mindless dead Crew of their relatively mindless Skeleton Captains who have still managed to retain their name and title. These Skeleton Captains are more powerful than their crewmates indicated by the strength of the curse that binds their Skull and holds both them and their crew stuck in this world. Players who decide to follow Tall Tales may encounter even more powerful Skeleton Captains who are the underlings of a Skeleton Lord and have managed to retain their memory and capability of speech. Skeleton Lords on the other hand are the most powerful of the cursed Skeletons, who have obtained greater destructive powers and a command over other cursed Skeletons.

A group of emergent Skeletons with differing arms.

Emergent Skeletons vary in difficulty depending on the Crew's active Voyage:

Bounty Skeletons are encountered on Bounty Quests and are distinguishable from regular Emergent Skeletons by their coloured clothing, typically a bandanna or cloth eyepatch. They spawn in waves of 4 or larger and usually have a single assigned type to the whole wave (see Types of Skeletons). After several Skeleton waves are defeated (generally between 0-6 groups of Skeletons), a final wave with the named Skeleton Captains and Skeleton Crew from the Bounty Quest will appear.

It takes about 6 Cutlass Combos to kill a regular Bounty Skeleton.

Large waves of Skeletons (groups of ~10) spawn on Active Skeleton Forts. Like Bounty Skeletons, the Skeletons of a single wave spawn as a specific type (see below). These Skeletons take 6-7 Cutlass hits to kill. After 12 waves of Fort Skeletons are dealt with, Players will encounter 3 Boss waves, each Captain or Lord supported by more Skeletons.

Skeleton Ships come with fully equipped Skeleton Crews that keep perpetually respawning once killed. Each Skeleton Ship is helmed by a Skeleton Captain. The Skeletons on top and bottom deck of a Skeleton Galleon can be of different type from each other. These Skeletons are as strong as Skeleton Fort Skeletons, spawning with any Weapons apart from Gunpowder Barrels (Skeletons on the Crow's Nest have Eye of Reach rifles to snipe players) and take about 6-7 Cutlass hits to kill. Once a Skeleton on the crew is killed, another one will spawn in its stead within seconds. The Skeletons on the Ship's Cannons come equipped with regular Cannonballs and one type of Purple and one type of Green Cursed Cannonball. The Skeletons on lower decks can use Wooden Planks to repair any holes done to the Ship's Hull, however they cannot bail water, becoming defeated once their Ship sinks. 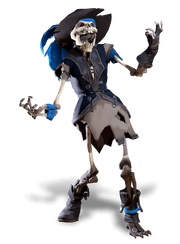 Emergent Skeletons usually spawn without any clothing on them. However, ordinary Skeletons that spawn during a Bounty Voyage or a Skeleton Fortress raid wear either Brown, Red, Light Blue or Purple Bandanas and Eyepatches.

Different types of Skeletons can spawn as a part of Bounty Voyages, Skeleton Fort or Skeleton Ship spawns:

Covered in gold, these skeletons are resistant to Cutlass strikes and weakened when exposed to water (standing in water, a splash from a Bucket, or Rain). The water causes them to rust up, weakenening their defenses and slowing their movements significantly for a period of time. This effect is indicated by a creaking sound, and a change of colour from glittering gold appearance to a darker, rusty tone. While firearms are quite effective in combating this type, the more effective route would be to use Firebombs, or simply blowing them up with a Gunpowder Barrel or a Cannonball is also an option.

Overgrown with plants sprouting from their bodies, these skeletons are weaker against Cutlass hits tearing apart their foliage. As a counterbalance, these Skeletons will start to heal rapidly when in exposed to any water, making battles during rain more difficult. This effect is indicated by their more vibrant foliage, a "sparkling" sound, and glowworms that start to surround the bodies of the Skeletons.

These dark, spectral skeletons thrive in the dark when they are invulnerable to damage as attacks pass right through their ghostly form. They become solid and susceptible to attacks If they are exposed to light. This can last a short while if exposed to a raised lantern light. The effect is more permanent during exposure to daylight. They appear to take 33% less damage immediately after they are stunned with the lantern. Shadows of Fate skeletons follow a similar mechanic, but require specific Flame of Fate to be made vulnerable.

These skeletons are the most frustrating of the mix by introducing explosives. They emerge from the ground with a Gunpowder Barrel grasped in their hands and attempt to eliminate you by setting off the fuse of the barrel as they get close. Stronghold Gunpowder Barrel Skeletons can emergently spawn as a part of Athena's Fortune Voyages. Stronghold Shadow of Fate Skeletons can spawn during the last Fort of the Damned wave. A Skeleton with a Keg of Ancient Black Powder is guaranteed to spawn after digging up Treasure during the last Chapter of an Athena’s Run of Thieves’ Haven. Stronghold Barrel Skeletons move a lot slower than regular Gunpowder Skeletons. The Gunpowder Kegs can be Harpooned from the Skeletons, after which they will immediately die. Gunpowder Skeletons also drop their Kegs if they are killed by Firearms, but only if the bullets don't hit the keg.

Colorful glowing skeletons that appear during Tall Tales voyages. They appear to have about as much health as normal skeletons but appear in large groups and spawn as long as the Crew is on the Island. The glow effect seems to persist only when players are within a relatively close range.

These Skeletons glowing with burning fire used to appear during some Tall Tales voyages. However with the Crews of Rage (Content Update), they became the default Skeletons at The Devil's Roar Islands. They spawn both emergently and as waves on Molten Sands Fortress. These Skeletons have a minor resistance to Fire, taking less damage from it than other types of Skeletons.

This blue and gold skeleton is a rare encounter whose defeat rewards the crew with a bundle of Ancient Coins. Its appearance is signaled by a loud clattering of coins while it digs itself up out of the ground, followed by jovial music as it runs around for a brief period before burrowing itself back into the ground at which point the encounter is over. Players must defeat the skeleton quickly before it disappears to earn the lucrative reward. It has a chance to be encountered on islands in both Adventure Mode or Arena.

Most commonly found as a part of the Fort of the Damned Raid, Shadow of Fate skeletons are similar to Shadow Skeletons, with their invulnerable ghostly form, however to be susceptible to attack, they must be exposed to a specific Flame of Fate indicated by the colour of their glowing eyes. Players must acquire the corresponding flame (all present during a Fort of the Damned Raid in the main tower), then raise the lantern to the Skeletons to make them vulnerable to damage. They have the same amount of health as regular Skeleton Fort skeletons, taking about 8 Cutlass hits, 2 Pistol shots, 2 Eye of Reach shots or a point blank Blunderbuss shot to kill.

They were featured prominently in the Fate of the Damned event in which they were found alongside the Ghost of Graymarrow, performing rituals and assaulting islands.

Found on Bounty Quests, these skeletons are functionally similar to Skeleton Captains but without the high ranking title of "Captain", a distinction important in acquiring The Commendations#Hunter of Cursed Crews commendation.

Elite skeletons with an authority-demanding hat. Much higher health than its lesser allies, appearing at the conclusion of Bounty Quests and Skeleton Fort raids. They can carry any weapon aside from a Eye of Reach. Skeleton Captains match the type of their current wave, being capable of spawning as a Regular, Gold, Plant or Shadow Skeleton Captain. Skeleton Captains drop a Bounty Skull during a Bounty Quest, or a Vault Key during a Skeleton Fortress raid. As of the Fort of the Damned (Content Update), single Emergent Skeleton Captains of any type can spawn on Island shorelines. When defeated, they drop a Villainous Bounty Skull and a Skeleton’s Orders Quest that leads players to a Ritual Skull and other Treasure.

Skeleton Lords are shrewd commanders of skeletons. Cursed from their humanity, full of hatred for other pirates.

Three additional Skeleton Lords can be encountered as bosses for active Skeleton Forts. These Skeleton Lords have the same amount of health and act identically with their only difference being their appearance:

Four Ashen Lords can be encountered during the Ashen Winds World Event, signified by a fiery Tornado in the skies. These Lords have a Fire based moveset and leave behind an Ashen Winds Skull that can be used as a fire-spreading weapon.