Stars of a Thief

Stars of a Thief is the fourth Tall Tale in the Shores of Gold arc. Pirates consult the findings of the old stargazer Sudds and follow the stars to obtain a Shroudbreaker gem.

The tale can be acquired from Sudd's desk at The North Star Seapost.

With some help from Sudds, players are taken on another adventure to try and piece together the Shroudbreaker. This tale tasks the players to look to the stars to decipher codes and follow yet another of Captain Briggsy's adventures to find another piece of the Shroudbreaker and get one step closer to solving the mystery and discovering the Shores of Gold.

A full, step by step walkthrough can be found at Stars of a Thief Walkthrough

Once the Crew has voted on the Tall Tale and listened to the Sudds, they are given the Tale Book, which they can find and take out in the Map Radial menu. Any Tale Book can be viewed with the Primary Use button (Left Mouse Button/Right Trigger). Once taking a closer look at the Tale Book, it's pages can be turned with the Q and E keys on a Keyboard and the Left and Right buttons on a Controller.

Pages 3-10 of the Tall Tale book are always the same:

Obliquity of the ecliptic, twenty-three degrees...
So, you had a run-in with the Captain, eh? I know all about it.
The stars whisper to ol' Sudds, they do!
They're his best friends, and they keep their secrets...
Make no mistake! Captain Briggsy was the smartest pirate on the seas and Sudds was the only one she trusted to read the stars...
...the only one to have a spyglass as special as her's!
The Great Warrior should be in appulse with the Serpent soon, I see..
So, now you're seeking the stones, tryin' to part the fog and follow in the Captain's footsteps.
Take these papers Sudds made.
Better find that special spyglass too, eh?
The Captain hid it when she left Sudds behind and now it can't see the stars.
Use it to take a peek at Sudd's friends. If you're worthy of the Captain's treasure, they'll show you where to sail.
Be sure to bring them papers back to me, though. They're not for keepsies!
My dear Queen, all that chromospheric volatility, so unbecoming...
You still here?
Hmm, no correlation with Laniakea...

Now where'd Sudds leave those ephemeris charts...
Oh, it's you! My spyglass! A fine keepsake.
I'll pass along along that pretty gem of yours in return.
Heh, Ol' Sudds won't forget!
Doesn't want the glowing eyes man angry at him, no no no...
So many secret stars...
Declination, twenty-two...
Need to collimate...

The North Star Guides You[]

Sudds met a young whippersnapper today. Green as leaves, he was. He hadn't even heard of the North Star!
You don't need no spyglass to find her, Sudds told the lad, she's the biggest and brightest friend and she likes to stay put.
Spot the North Star and you'll never need a compass again!
And the boy smiled, and asked Sudds: "What if it's raining?"
Sudds gave the lad a thick ear. Busy, too busy for foolish questions! Gots to reach ol' Plunder by nightfall... 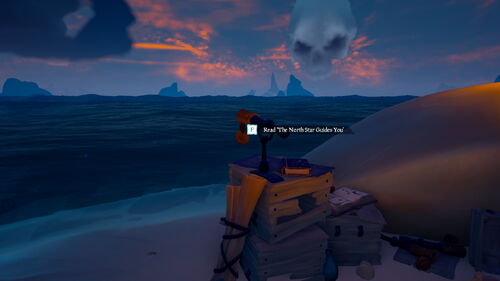 Brave little Glimmer Fish...
He used to swim down here in the water with all of his brothers and sisters, shining in the sun. Sometimes it's not wise to shine too brightly...
Bigger fish came with empty bellies, and their teeth went snicker-snack!
Soon Glimmer Fish was the only one left to guide the ancient ones on their journey here. One brave little light, all alone...
The ancients felt sorry for Glimmer Fish and placed him in the heavens where he could swim in safety. Lucky little fishy!
Now Sudds must swim along too, all the way to the shores named after the sneaky snake... 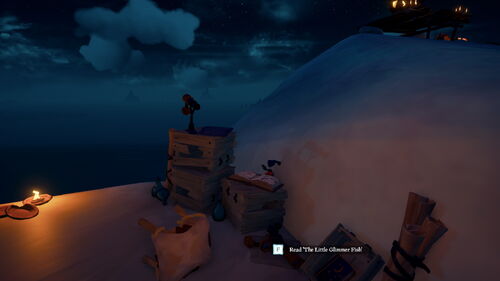 Snake Gets What He Deserves[]

Snake has many voices and likes to play tricks. He coiled along a branch and waited until the Great Warrior was near.
"Help me!" came the Sea Queen's cry, "Won't someone help me, for wicked One-Eye has me by the tail!"
Warrior heard it all. Warrior ran through the trees, not looking up above his head, and whump! There came Singing Snake to coil around his throat.
Snake is cunning, but Warrior is strong! He grabbed at Snake and hurled him up into the stars, where he has lived ever since!
Sudds can't get a good view from here. Needs to sail out to Old Harry's place before daybreak... 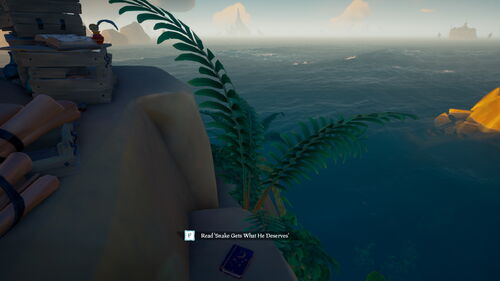 The War that Shook the Sky[]

There was once a great battle that shook the whole heavens, and caused great sadness to Sudds's friends above.
Great Warrior knew that he would have to battle Old Kraken, for she planed to feast on the merfolk and their kin.
To fletch the arrows he would need, Warrior told Proud Eagle to give up eight of his feathers, or they would go to war.
Eagle refused, of course, and tore at Warrior with his sharp talons, but it was no use. Warrior fled with his golden prizes!
He dropped one feather as he fell back to earth, and it's still in the stars! Sudds wants to see it from the moon-shaped isle... 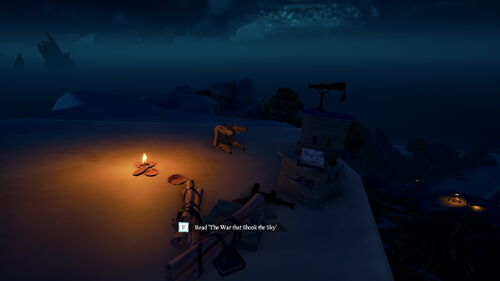 The Binding of the Kraken[]

Great Warrior took his arrows and went to make war with Kraken, but he had lost a feather along the way.
He thought of Singing Snake and the venom it used to bite, and he tipped each of his arrows with the very same.
The arrows stung the Old Mother and made her sleepy, so that she sank down to the sea bed. Warrior gave out a great cry.
The ancients came, then, with their great chains. Together they bound Kraken rightly to the star above, far out of reach.
The Sea Queen was grateful, for her people were saved, and she promised they would always help those lost at sea. 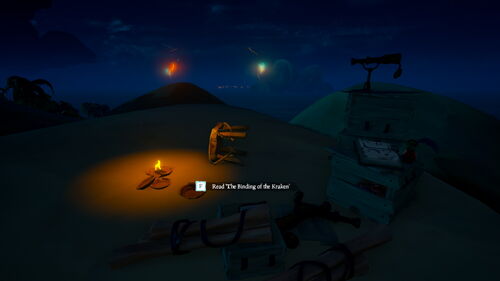