Stronghold Gunpowder Barrels are a highly volatile Explosive in Sea of Thieves. They can be found being carried or guarded by Skeletons. These Barrels can be sold to the Merchant Alliance Representative Senior Traders on the dock of every Outpost for Gold and Reputation.

Primary Use of a barrel in hand will light a 6s fuse to detonate, but can be cancelled by Secondary Use. The barrel can be picked up while the fuse is lit.

The Stronghold Gunpowder Barrel will immediately detonate if shot, struck, caught in an explosion, or upon contact with the outside of a ship hull. The explosion will damage all nearby pirates and Creatures (based on distance) within 9 paces of the detonating barrel, and damage any Ship within the explosion distance.

Stronghold Gunpowder Barrels can be sold to:

The following is the reward chart for the sold Barrel:

Here is the Pirate Chat Wheel of the Barrel: 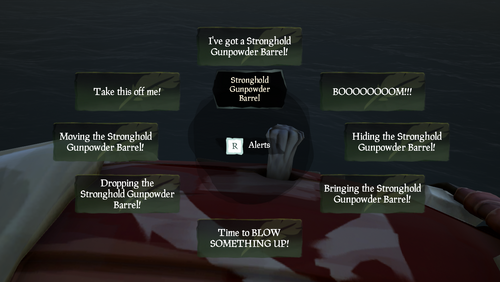