Back to page
Edit

Tall Tales are lengthy, story driven Quests in Sea of Thieves that are accessed via Tale Books given by various NPCs who direct players towards grand adventures to uncover secrets of The Sea of Thieves.

Tall Tales differ from other Quests and Voyages in that they need to be voted for at their respective Tale Books that are found beside specific NPCs that provide the Crew with an introduction to the Tale and its Book. The locations of Tale Books are marked on the Map Table with circular black icons that can be interacted with when the map is zoomed in to them. These Markers are enabled by default, but can be turned off in the Gameplay Settings Menu. Information on where to begin each specific Tall Tale is also noted on the "More Info" page when hovering over individual Tales in the Tall Tales tab in the Reputation Menu.

When voted for, Tall Tales appear on the Ship's Voyage Table, where Crewmembers can then vote to cancel the Tale. When Crew members have reached any Checkpoints of a Tall Tale, they can also put these Tales up for a vote at the Voyage Table that then start from these Checkpoints. Crews can have a single Voyage and Tall Tale active on the Voyage Table at one time. The Tale Book proper appears in every Player's Quest Radial Menu after they have listened to the related NPC's introduction to the Tale. When in hand, players can examine the Book closer and turn pages to read further. Tale Books lead Player Crews to their next destinations through hints and puzzles.

In addition to Tale Books, players will acquire various Quest Items during Tall Tales that help them progress in the story or solve puzzles. Quest Items often appear in the form of Trinkets, Keys and Chests that can be carried around, or in the form of Equipment that appear beside the Tale Book in the Quest Radial Menu. Most Quest Items also cannot be sold to any of the Companies, making them only useful for the Crew that is doing the specific Tall Tale. When Players lose their Quest Items, the Tale will fail and they will have to start over.

Every Tall Tale has 5 hidden Journals (10 for Shores of Gold) that appear in the world only when the Tale is active. These Journals are optional, giving some background story to every Tale. Every Tall Tale has a Commendation for finding and reading every Journal. The first Journals are most always around the first Islands that Players arrive at or go to. Every Journal should have a hint of the next Journal's location written in the text.

Some Tall Tales, e.g. The Seabound Soul, also have optional hidden Collectable Quest Items. These Items generally serve no larger purpose than completing a Commendation for the Tall Tale.

Tall Tales are divided into Chapters which unlock a checkpoint for the Tall Tale, allowing players to exit and resume from this Chapter of the Tale at a later time. Players will have one saved checkpoint per Tall Tale. Starting a Tall Tale from a Checkpoint must be voted upon at the Voyage Table. Tall Tale Checkpoints can be discarded in the Quest Inventory.

Tall Tales are considered complete if all the chapters have been completed. Players will receive a reward of 8000 Gold for the completion of each Tall Tale (which is also shared in Player Alliances). This reward can be affected by any reward multipliers gained from Events.

Every Tall Tale also has a handful of Commendations that unlock various themed Cosmetics when completed. They mostly reward one Cosmetic when completing the Tale for the first time and then another for completing all the related Commendations. Commendation progress and rewards can be tracked from the Reputation Menu under the individual Tall Tales tabs.

An introductory Tale that every new Pirate has to complete to be able to set sail on The Sea of Thieves. After completion, the Maiden Voyage can be accessed from the Main Menu (a small button at the bottom right corner of the screen). The Maiden Voyage and its Commendations and Cosmetic rewards can be tracked through the Tall Tales tab in the Reputation Menu. 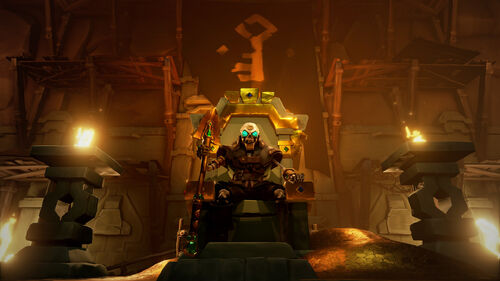 Players embark on a grand episodic adventure to piece together the mythical Shroudbreaker Artifact and enter the Devil's Shroud to find the legendary Shores of Gold.

These Tales cover an ongoing Story Arc detailing the return of Captain Flameheart. They are released individually via Content Updates and can be completed in any order.

A Pirate's Life is a special collaboration with Disney that sends players to team up with Jack Sparrow (from Disney's The Pirates of the Caribbean) in a story campaign spanning 5 Tall Tales.