The Arena is a new player vs player (or in this case - crew vs crew) mode coming to Sea of Thieves in early 2019. The battles will take place on both the sea and on land. Gather friends and battle rivals for bounty and rewards. The battles are completed to impress a Sea of Thieves faction known as the Sea Dogs which, other than their named items that be purchased in the shops, have not really been utilized in the game up to this point.

While the game itself is already open to PVP, The Arena will feature smaller condensed maps, forcing players much closer together. In the main game, players not wanting to participate in combat with other players had the option to leave the area of conflict or log out and start a new game session, whereas players entering The Arena will be like-minded players looking for a good battle and loot to confiscate. 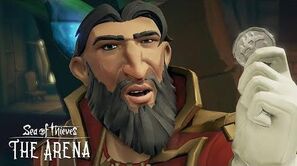 Sea of Thieves The Arena Official Announce Trailer
Add a photo to this gallery
Retrieved from "https://seaofthieves.fandom.com/wiki/The_Arena?oldid=6948"
Community content is available under CC-BY-SA unless otherwise noted.