The Devil's Roar is a region in The Sea of Thieves that was mapped and discovered during Forsaken Shores. The Devil's Roar is a harsh and volcanic area in the Southeastern Region of the World Map. The Roar is mostly composed of Large Islands formed of Volcanoes, covered with half-burnt plant life and strange red crystal growths. Aside from the Volcanic Islands, there are also several Volcanoes in the Seas. The whole Area is extremely dangerous to any seafarers with very little Resources. The Islands pose various threats to any explorers in the form of active Volcanoes that are ready to erupt at any time with Lava falls, boiling hot waters, constant Earthquakes and erupting Geysers. Even the caves offer little protection with cracked lava flowing through and Skeletons looking for a chance to sneak up on unsuspecting foes.

The Devil's Roar does not belong to any single Trading Company, however the Roar seems to imbue all of its Treasure with Ashen magic, making them twice as valuable to any Trading Companies. Therefore more valuable, yet risky Voyages are available at the only Outpost in the region: Morrow's Peak Outpost. Before the spread of goods across all Regions, The Devil's Roar was the only region where Pirates could obtain the rare Kraken and Ocean Crawler themed Items, along with a small selection of Forsaken Ashes and Bone Crusher type Items.

At the Outpost, Grace is also looking for any signs of the extremely rare Box of Wondrous Secrets.

Despite its harsh climate, the Devil's Roar is home to Devilfish. 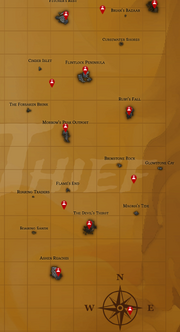 Location of Volcanoes on the Rarethief Interactive Map

The Devil's Roar is home to one Outpost, two Seaposts, a single Fortress and 14 uninhabited Islands.

The Devil's Roar is home to various "Ashen" versions of regular Treasure Chests, Trinkets, Bounty Skulls, Cargo Crates, Trade Good Crates and the Ashen Chest of Legends that are worth 1.5-2 times their original value. These treasure items are signified by orange glowing veins. These items are the main rewards for Voyages purchased in the Roar, however they can also be found in the three other Regions of the seas. The Ashen Lords World Event rewards players with a number of Ashen Treasure Items.

The Devil's Roar is home to 5 uncharted Sea Volcanoes that can erupt at any time. Despite Small Islands in the Roar not having any active volcanoes, several of them are in range of these Sea Volcanoes. The coordinates for the Sea Volcanoes are as follows: X-12, V-15, Y-19, V-20, and Y-25.