The Sunken Curse is a pre-event for the Cursed Sails DLC in Sea of Thieves. It ran from July 11th - 25th 2018. The quests were given by the Bilge Rats. The NPC Duke can be found in any Outpost's Tavern.

This event is the third Bilge Rat adventure and encourages players to dive deep into the water and discover what lies below. Valuable items include artifacts, skulls, and treasure chests randomly spawn on the oceans floor and sea beds. Scattered throughout the sea are the new Cursed Mermaid statues. Players will need to destroy any statue they encounter, but it won't always be easy. Some of the statues heal themselves and can take up to four players to defeat. There are three types of statue - Emerald, Sapphire, and Ruby. The Sapphire can be broken by one pirate, the Emerald would be better with two, and the Ruby, being the hardest to destroy, will take 3-4 players. It is probably best to do this event with a full galleon team.

When a statue takes damage, it will start to crack. Players who are too close to the statue will take damage as well. Try using a cutlass at the edge of the melee range to avoid the damage or at least reduce it. A gunpowder barrel can also be used to help break the statue. Just don't blow yourself up in the process.

Each time player destroy a statue, they will receive event-specific doubloons. These doubloons can then be traded in for pieces of the Wailing Barnacle clothing set, gold, and rep. Completing the standard and legendary challenges will additionally reward 150 doubloons.

Once the event is completed, players will be able to complete challenges. However the limited-time clothing set and the doubloons will no longer be available.

Tips: Don't forget about sharks. They will still be in the area. so be sure to reload any weapons before leaving the ship.  Try not to get tunneled on the statues. There are still sunken ships and treasure to be had. Remember to take a look around before leaving.

These are items that were made available during this event.

Ah, you look like the sort who isn't scared of a little light drowning...

The Bilge Rats, as always, have been first to catch wind of local weirdness! How d'you feel about swimming? And malevolent curses? See, these strange mer artefacts have been sighted lately. You'll find them underwater, but they harm whoever gets near! If you're brave enough, you can swim down and destroy them. Just a warm-up for us, naturally. But you might struggle! I think a real pirate would have no trouble finding and destroying the artefacts. I did it before my morning grog!

How to Complete the Cursed Mermaid Event

To complete the Sunken Bilge Rat event, players will need to have 10 commendations, which are earned by locating the Cursed Mermaid Statue Locations. Seven of the commendations will also net the player Doubloons that they can spend with Duke, the Bilge Rats vendor in the Tavern. See the list of Market Items that are available during this event above.

There are three types of Cursed Mermaid Statues to look for and destroy. These are:

The 10 commendations required to complete the event are listed below. The first seven are completed by breaking statues. The last three are titles for completing the first set.

Unfortunately the statues are random, but they are always in the water, near islands, but more generously in deeper water. They don't appear to spawn near Outposts or Forts.  They will have a bit of a shimmer to make them easier to spot, and players will hear ominous music when they are near one.

It has been noted in previous days prior to the event that Wanda, the Blacksmith in the Golden Sands Outpost has apparently forgotten her name recently as her title has change to The Blacksmith. She is unable to talk and is visibly concerned about an injury she has received on her right arm. Speculation is that she herself went exploring and has been infected by the mermaid's curse.

Add a photo to this gallery 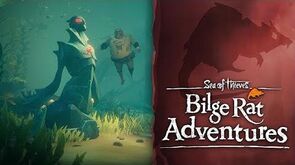 Official Sea of Thieves Bilge Rat Adventures The Sunken Curse
Add a photo to this gallery
Retrieved from "https://seaofthieves.fandom.com/wiki/The_Sunken_Curse?oldid=7155"
Community content is available under CC-BY-SA unless otherwise noted.