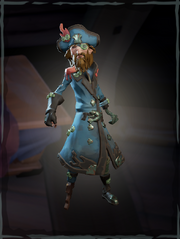 The full Wailing Barnacle Set on a Male Pirate. 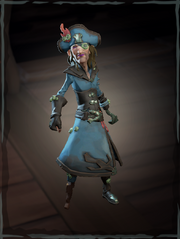 The full Set with the Dress of the Wailing Barnacle.

A closeup of the full set on a Galleon.

The Wailing Barnacle Set is a set of cosmetic items with an underwater motif. The items are adorned with fish, barnacles, and coral. Most of the Wailing Barnacle Set items were available during the Cursed Sails, Cursed Crews and Shrouded Spoils Content Updates. The missing Clothing, Vanity and Equipment items can be purchased from the Black Market for Doubloons.

This set is missing the four instruments of the equipment set.

This set also has a variant called The Silent Barnacle Set

The Wailing Barnacle was once sailed by Stitcher Jim. Its final fate was to rest at the bottom of the sea, despite having a figurehead thought to appease the spirits of the sea.