Wayfinder Voyages, or Treasure Vault Voyages are Voyages offered by the Gold Hoarders Trading Company in Sea of Thieves. These Voyages see Crews completing a Torn Map that leads to a Treasure Vault Key. The Maps that lead to the Key are torn into pieces. These pieces, called Torn Map Parchments will need to be located with a Golden Wayfinder Compass that always points towards their location. Players can choose to sell the Treasure Vault Key back to the Gold Hoarders Representatives, or locate its keyhole and attempt to loot a timed Gold Hoarder Treasure Vault. When the puzzle of the Vault is solved, players can obtain the more valuable Chest of Ancient Tributes and sell that to the Hoarders along with any other Gold Hoarder Treasures from the Vault instead.

Wayfinder Voyages can be purchased from the Gold Hoarders Representatives at any Outpost by any Pirate that has reached the Rank 25 Gold Buccaneer Promotion with the Company. When an eligible Player does not see any Wayfinder Voyages in stock, they have to rely on a different Crewmate to buy the Voyage or wait for the Voyages to be restocked at 6am.

The Voyage requires to be put up on the Ship's Voyage Table and to be voted for by the Crew before the Golden Wayfinder Compass can be seen in the Quest Radial Menu.

Any Players can take part in a Wayfinder Voyage if one has been put for a vote on the Voyage Table by another Crewmate.

Wayfinder Voyages are not composed of Chapters of Quest Maps, but instead give the Crew access to a Golden Wayfinder Compass in their Quest Radial Menu. With the help of the Compass, they will need to locate Torn Map Parchments that then complete a Torn Map Quest in the Radial Menu. This Torn Map will reveal an X Marks the Spot Map on a Large Island with a single X. The X marks the location of a buried Collector’s Chest with Gold and a single Treasure Vault Key inside. Once all Map Parchments are dug up, the Compass will be removed from the Quest Radial. Once the Chest is found and dug up, the Torn Map is removed from the Quest Radial and the Voyage is counted as complete.

At the start of the Voyage, Players will gain access to a Golden Compass that is located at the top of the Quest Radial Menu. This Compass can be interacted with the same way Players interact with their own Compass, however, instead of showing Compass directions, the Compass needle of the Golden Wayfinder always points towards the location of a buried Torn Map Parchment. The needle points towards the general direction of the Parchment, swaying left and right. The closer the Player is to the location of the Parchment, the narrower and faster the needle moves. When the Player is above the digging location, the needle will start circling around as if it lost its direction. Players need to use their Shovel to dig up the Parchment in a bottle at this location. Sometimes, Gold Hoarder Skeletons will ambush the Crew. When killed, they have a chance to drop Trinkets. When the Parchment is picked up, the Crew will receive a Torn Map in their Quest Radial Menu beside the Golden Wayfinder Compass and the Compass will point towards the next Map piece. Once the Torn Map is completed and there are no more Parchments to find, the Golden Wayfinder Compass will be removed from the Quest Radial Menu. 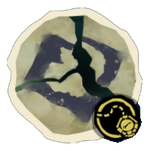 The Torn Map is the second Quest Item of Wayfinder Voyages. As stated above, Crews will gain access to the Map when the first Torn Map Parchment is found, dug and picked up. This will reveal a Treasure Map with a single revealed map sector. Each found Parchment reveals another sector of the Map. The number of sectors and parchments is dependent on the difficulty of the Voyage, ranging from 3 to 6 pieces. When completed, the Torn Map will be nearly identical to a regular Large Island X Marks the Spot Map, with large missing spaces between the sectors. There will always be one X on the Torn Map (sometimes it may be largely obscured by the missing spaces, requiring the Crew to look for edges of the X and guess its estimated location). The X will always reveal a Collector’s Chest with Gold and a single Treasure Vault Key inside. The Voyage is considered complete when the Chest is dug up.

The main reward of a Wayfinder Voyage will be the Collector’s Chest containing the Treasure Vault Key dug up with the help of the Torn Map. While the Torn Map Parchments themselves cannot be sold, there is a chance for Gold Hoarder Skeletons to ambush the Player when a parchment is dug up, who then have a chance to drop any Trinkets that Players can then pick up and sell to the Gold Hoarders back on Outposts. Gold Hoarders Emissaries receive Emissary Grade Reputation for each dug up Torn Map Parchment.

For Pirates who are not satisfied with the offerings for the Keys can go on a separate adventure to find and unlock a matching Gold Hoarder Treasure Vault with the Key. These Treasure Vaults are packed with piles of Gold, Treasure Chests and Artefacts.

Each Key is named after the Island its Vault is hidden on and has an inscription leading to the location of the hidden keyhole on the Island. There are a total of 5 different Treasure Vaults and Vault Keys.

When unlocked, Gold Hoarder Treasure Vaults will open for roughly 3 minutes, during which Player Crews can loot the Vault clean from its riches. For those who want an additional generous payout, can try to solve the Puzzle of the Vault. Each Treasure Vault has 3 hidden Medallions that need to be located and put in the central Stone Table in the Vault. The Medallions may require the player to do some climbing and precise jumping around the Vault. They should be easy to notice as they always shine in a bright white Glint. Each Medallion will reveal the solution for one Pillar on the Stone Table. There are four Pillars in the Vault that can be moved around. The first three Pillar images are revealed on the Stone Table, the last Pillar image is a combination of the first three images. Players will need to push the button on the Stone Table to enter the Pillar Solution, after which, a stone door will open with a Chest of Ancient Tributes inside. This Chest can also be sold to the Gold Hoarders. The Chest, combined with the value of any retrieved Treasure items from the Vault are worth more than the Key of the Vault itself. However, be mindful that if you fail to retrieve anything from the Vault in the allotted time limit, the Key will be used and Players will return with nothing. When the Vault door closes after a time, any Players inside will be stuck, left to drown with water filling the room.