公司使者 are Player Crews that have decided to Represent a specific 公司 in the Sea of Thieves. Sailing as an Emissary provides Crews with various benefits, such as increased payouts and Reputation gains for Company-specific Treasure Items, exclusive high-reward Emissary Quests and bonus Cosmetics rewarded to the most active Emissaries on the seas. 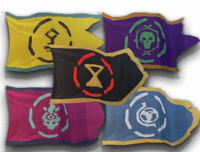 Any Player or Crew wishing to Represent a specific Trading Company as an Emissary must first purchase an Emissary Flag offered by the Company Representatives. The Gold Hoarders, Order of Souls and Merchant Alliance sell their Emissary Flags to anyone who has reached at least Rank 15 with the Trading Company. The Reaper's Bones Company offers their flag for purchase to anyone who manages to reach them at the The Reaper's Hideout. The Pirate Lord offers the Athena's Fortune Flag to anyone who has become a Pirate Legend. Players cannot become Emissaries for The Hunter's Call or Sea Dogs.

Trading Company Emissary Tables are usually next to the Company Representatives on Outposts. The Athena's Fortune Emissary Table is always situated by the Mysterious Stranger in the Tavern. Reaper's Bones Company Tables are replaced by Shrines that are hidden away from sight on every Outpost, with the main Shrine situated in front of The Servant of the Flame at The Reaper's Hideout.

Like with the Ship Customization Chest at docks, an Emissary Table cannot be used if the Crew's Ship is not docked nearby. This is to prevent Crews from leaving people behind at an Outpost to raise and lower the flag at will. Also, once the crew has voted to become a specific Company's Emissary, they cannot use any other Emissary Tables and will have to lower their current flag. After voting to become an Emissary, Crews will be able to see small Ship models on the Emissary Table, which shows how many active Emissaries are on the seas for that Company within the server.

If the majority of the Crew has voted to represent a Company as an Emissary, their Ship will raise two Emissary Flags, one on the back of the Ship and a Pennant on top of the Crow's Nest. These Flags will remain on the Ship aside from any regular Flags until the Flag is lowered at the Table, or the Ship sinks. These Flags also visually reflect the Emissary Grade status of the Ship, with the pennant becoming ever larger with higher grades. If you look at another nearby Emissary Ship from your Spyglass you will hear a tune representing that company. Emissary Ships will be more valuable than non-emissary ships, as player Crews have to actively perform various duties for the company to raise their Emissary Grade. This means that any high ranking Emissary Ship on the seas is more likely to have Treasure on board, making them targets. It is up for each Company's Emissaries whether to work together or take each other down, whereas the whole point of the Reaper's Bones Emissaries is to hunt down other Emissary Ships and sell their Broken Emissary Flags for a wealthy sum of Gold and Reputation.

Generally, your Crew will be an Emissary for as long as the session lasts, however there are two ways of losing your Emissary Status: Lowering your company's Emissary Flag or Sinking.

Lowering your own Flag[]

Trading Companies value the work of their Emissaries and as such, they will offer generous amounts of Gold and Reputation if a Crew decides to return to the Company Representative and retrieve their Emissary Flag. Emissary Flags can be lowered just as they are raised: by holding a vote at the appropriate Emissary Table. Any Emissary Ship that has reached above Emissary Grade II will receive a remarkable sum of Gold and Reputation for that Trading Company:

The other way of losing your Emissary Status is if your Emissary Ship sinks. Your crew will be notified of this happening. After sinking, a Broken Emissary Flag will float to the top where your Ship was. This Flag can be picked up and delivered like a Treasure item and only sold to the Reaper's Bones at The Reaper’s Hideout for Gold and Reputation. Selling your own Ship's Flag will only give you 1 Gold, however selling someone else's Broken Emissary Flag will be greatly rewarded:

Emissary Grades can be advanced by doing various Company-related tasks while representing the Company as an Emissary. See individual Trading Company articles for their respective Emissary Reputation gains.

The higher the Emissary Ship's Emissary Grade, the higher the Crew's Gold/Doubloon, Reputation and Emissary Value gains. The following table marks the Reward and Emissary Value multipliers by each Grade. When selling Treasure as a graded Emissary, Players will see the Gold or Doubloon bonus added behind the base value of each sold Treasure in the top right of the screen, along with a small icon of the Trading Company to mark the source of the bonus.

Once a Crew has achieved Grade V as a Company's Emissary, special Emissary Quests will become available for the Crew. These are collections of Quests with high-value rewards for that Company. Emissary Quests can be claimed at a Company Representative on Outposts. An Emissary Quest can be claimed for reaching Grade V just once, meaning that players will have to return their flag and work their way back to Grade V to claim another Quest in one session. The Reaper's Bones does not offer a Quest, but a special power to give all other Emissary Ships the Reaper's Mark on their Map Table.

The Ledger Scoreboards will be closed and reset at the end of every month. At the close of a Ledger, every player to reach Tier 3 or 4 (reach a higher Value score than 50% of the other Emissaries) will be rewarded with exclusive shiny Company Sails, whereas any player to reach Tier 2 and above receives a Title.

Reaper's Bones Emissaries receive only a quarter of the original Emissary Value of selling Treasure belonging to other Companies.

Emissary Value is not shared between Crews in Player Alliances.