Every Fort Island is set up like a Motte and Bailey Castle with the main fortress built on top a hill with a heavily fortified courtyard below. The fortification structures surrounding the main Fortress itself are made of plain wood, however they are surrounded by spikes on shorelines and guard towers both built on the walls and inside the surrounding shorelines. Most of the in-land towers are fitted with Cannons and Barrels with two featuring Ammo Chests. The sea-towers all contain 3 Cannons and a few Barrels. The main fortress structure has 3-4 floors and a Treasure Vault below it that becomes locked during a Skeleton Fort World Event. 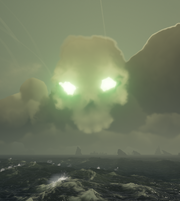 An ominous skull cloud appears over an active fortress waiting to be raided.

Every now and then, one Fort can become manned by a crew of Skeletons who hide their Stronghold Treasure in the Fortress Vault. An active fort is indicated by a large thunder cloud in the shape of a Skull with green eyes. During this World Event, any Player Crews approaching the Island will be shot by Skeletons using the Island's Cannons. Players will encounter 12 waves of Skeletons on the active Fort Island itself. There are three more "boss" waves, spawning a Skeleton Captain, an Ashen Guardian and Ashen Key Master and finally a Skeleton Lord. The Lord will drop a Stronghold Key that opens the locked Fortress Vault below the main structure.

Every main Region is home to 3 Skeleton Forts with The Devil's Roar only accommodating one. One of the Forts in The Ancient Isles, Old Boot Fort was turned into the Fort of the Damned during the second Halloween that houses its own World Event.

The Fortresses and their Map coordinates are as follows: