Sea of Thieves is a first-person multiplayer game developed by Rare and published by Microsoft Studios for Xbox One and Windows 10. The game was first playable during Closed Beta in the last part of January 2018. It was fully released on March 20, 2018.

As a Xbox Play Anywhere title, the game features cross-platform play between Xbox and Windows 10 systems. Both character and achievement progress is synced across systems, tied to a player's Xbox Live account.

Sea of Thieves is a Co-op and Player versus Player multiplayer game where players take on the role of Pirates sailing on the open sea looking for Treasure and battling each other. Players can cooperate in up to 4-person Crews or sail alone, picking up Quests and Voyages from various Companies, which generally involve sailing to various Locations to find buried Treasure, transporting various Trade Goods, battling Skeletons or hunting Animals, Fish and other beasts. All this is to earn Gold and Reputation with various Trading Companies to work your way up to becoming a Pirate Legend.

The game is focused on emergent gameplay. This means that Crews that encounter each other on the seas can choose how to play the game. They can battle it out for each other's gathered Treasure either in Ship to Ship combat by utilising the Ship's Cannons and clever maneuvering tricks or in Close Combat by utilising a variety of Weapons. The other alternative would be to work together in Player Alliances and share all the hard-earned Treasure with all the Ship Crews in the Fleet.

Sea of Thieves favours an equal playground where players can excel with their Skills and Wits instead of mechanically favouring the Players who have acquired the most Gold or Reputation. This means that every Pirate starts out with the same Equipment, Weapons and Ships that cannot be improved in any way. The only purpose for gaining Gold or leveling up with the various Trading Companies is to gain visual upgrades to show off your dedication to a certain Style or Faction by wearing themed Cosmetic Sets or showing off your hard earned Titles. To counterbalance this linear progression system, the game likes to keep its mouth shut about as many elements as possible, trusting the players to find out how to use different Tools or Equipment or even how to sail the Ship most efficiently by themselves or through communicating with Crew members or Enemies.

The game is fairly forgiving with Player or Ship death, making sure that the players do not lose anything significant that would help them return to the Seas immediately. Instead the Player Crews only chance to lose all the Treasure and Resources that have been gathered during a single Sailing session. The Crew's Ship acts as a portable base, as any players far away from their Ship can find and catch a Mermaid in the seas to return to their Ships. Likewise, once a Player dies, there is a brief window in which they can be revived by other players. If this is not done in time or the player chooses to offer their soul, they will be transported to the Ferry of the Damned for half a minute until they can return to their Ship to try to fight for their loot once more. When a Ship sinks, any Treasure on board will float to the top of the seas for around five minutes until it will sink and the Crew's Ship will spawn at a different location of the Sea of Thieves. Any players who survive the sinking can try to regain the Treasure on a Rowboat or keep it floating or away from other Crews for as long as possible, until the rest of the Crew tries to sail back to it. Any Resources gathered on the Ship during the session will sink with the Ship, however every new Ship will spawn with a handful of Resources ready at the Ship's Barrels.

There are currently two different Game Modes in the Sea of Thieves: Adventure Mode and The Arena.

The Adventure Mode is your traditional Sea of Thieves experience, placing your Player Pirate and their Crew and Ship in one of the many Outposts in the titular Sea of Thieves, leaving you to find your own Adventures, by either following the Story mode of Tall Tales, going on Bilge Rats time-limited or permanent Adventures or earning Gold, Reputation and Commendations with the five main Trading Companies: Gold Hoarders, Order of Souls, Merchant Alliance, The Hunter's Call and the Legendary Athena's Fortune. Up to six Crews of up to four pirates can populate a single Adventure mode Server.

The Arena game-mode is focused for those who want to enjoy a more Structured Player versus Player experience, pitting up to five Crews against each other at the Sea Dogs Arena. The Glorious Sea Dogs are the sixth Trading Company that only offer Gold, Reputation and Commendations in the Arena game-mode. Arena Matches consist of 15 minute battles in various small circular areas inside the Sea of Thieves for the same X-Marks-The-Spot Treasure Maps hiding Sea Dog Chests that need to be battled for and sold to Sea Dog Agents on specific Sea Posts.

In order to become a Pirate Legend you must reach reputation level 50 in all 3 trading companies, this unlocks a secret underground world available only to those who possess the Pirate Legend title.

Buy now! Embark on a shared-world adventure and live the essential pirate life: sailing together, hunting treasure and becoming legends!

Sea of Thieves is an Xbox Play Anywhere title that can be played on Windows 10, and Xbox One systems. 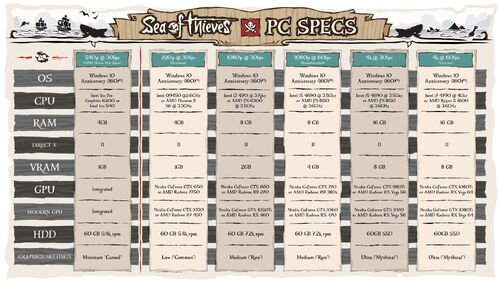 Sea of Thieves can be played on below-minimum specs at 540p @30fps and also offers 4k support @60fps.